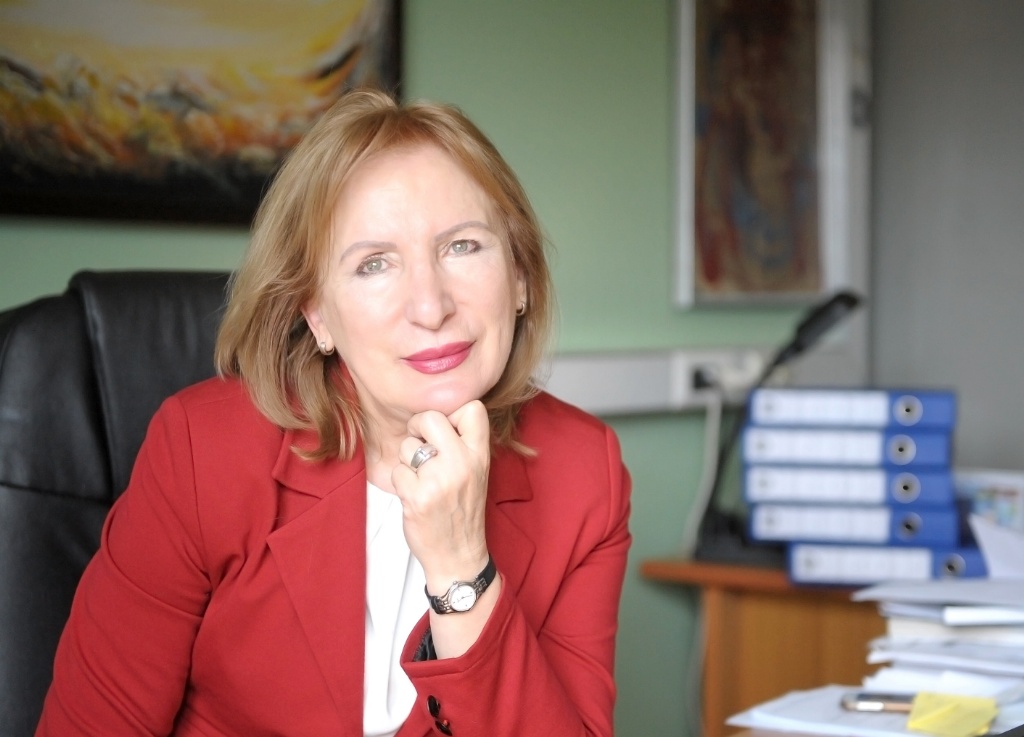 Be it the mountains of Kosovo, the fields of Albania, the lakes of Montenegro, Ms Drita Hajdari explores them all. Adoring the nature, Drita loves to go hiking and does it almost every weekend. When she speaks with composure about her outdoor activities and all her experiences in the nature, covered by passionate laughter and warmth, one would never imagine that she investigates and prosecutes the most challenging and problematic issues of Kosovo. Ms Drita Hajdari works as a Prosecutor for the Special Prosecution Office of Kosovo. Well-dressed, self-confident and fully committed, Drita commences her justice journey every morning.

She is the first local prosecutor to file a war crime indictment against a senior politician in Kosovo.

âI went to law school and became a prosecutor to deal with crimes that very few choose to prosecute. I deal with cases that I strongly believe need to be addressed. This society needs rule of law. Standing up against serious crimes in Kosovo and being the voice of justice is an honour. This keeps me going every single day,â Drita says.

Avoiding speaking on any details of her every day work, as she deals with very sensitive matters, she looks very ambitious and determined when she speaks about justice.

Ms Hajdariâs journey in the judiciary started in the 80s. A graduate of law back in 1983, she started working initially as a judge, only one year after her graduation.

Ms Hajdari worked as a judge until about 1990 when the crisis in the former Yugoslavia started. Even though she never imagined that she would change her profession, she decided to abandon the judgeâs bench and become a lawyer. She was determined to speak on behalf of those who cannot speak for themselves. She worked as a lawyer for couple of years in very difficult times and conditions.

Remembering the times when she worked as a judge in the former Yugoslavia, she says that the biggest difference of the judicial system between then and now is that the responsibility of proving a crime in the court is currently in the hands of the prosecutor. Explaining the numberless battles she fought in the court, she decisively states that the success of a case does not depend only on the prosecutor, as many seem to claim. âRequesting investigation, terminating an investigation, filing an indictment, etc. are successes throughout the proceedings. It requires an immense amount of effort from all sides, regardless of the epilogue. All these processes should ensure access to justice and fair proceedings, and this is a success in the rule of lawâ Drita states.

Right after the crisis in Kosovo, she was immediately appointed as a prosecutor, when the United Nations Mission in Kosovo was administering the whole justice system. As she was living in Mitrovica before the conflict and lost everything during the crisis, including her house and all her belongings, she moved to Pristina and started from scratch in 1999. But nothing ever stopped her from pursuing what she believed was right and fair.

However, she was eager to embrace again her justice path, and pursued her career with the United Nations, in the Judicial Inspection Unit.  As part of the unit, she assisted with the selection process of judges and prosecutors and also with the establishment of Kosovo Prosecutorial and Judicial Council.

She worked with the United Nations until 2008, when she joined a USAID Rule of Law Project for only two years. In 2010 Drita decided to return to the profession at heart. âAll these years after the war, when I left the prosecution and worked for the UN, I kept telling myself every single day that Iâm going back to Prosecution.â Drita says.

After a very long and challenging re-appointment process, she was assigned as a Prosecutor for the Basic Prosecution in Pristina. During her work at the Basic Prosecution of Pristina, she led the battle against corruption and was chosen as the national coordinator against corruption. Trained to deal with such serious crime, she was the only one to deal with cases of corruption in Pristina for a very long period of time. âEverything happens in Pristina. All the institutions are here. So you can imagine the workload and the challenges of the cases that I had to deal with every dayâ Drita explains, adding that regardless of the stress and the difficulties, it was the reassurance of concrete results that kept her going.

Since 2013 when she was appointed Special Prosecutor, she has always been seeking for a new challenge. Itâs a professional adrenaline push, she explains. Over the past four years, she has been fighting serious crimes on a daily basis. From corruption, to terrorism and organised crime â Drita knows no limit. Like a true warrior, she never stops fighting for justice. âIâm pushed by challenges. They motivate me.  I wake up every morning, reminding and promising myself that I have to keep calm, but the moment I enter a court-room, all my promises to myself vanish,â Drita says.

She takes each case to heart and puts all her energy into it. Packed with binders and determined to succeed, she turns into fire immediately after entering the court.

Dritaâs various legal experiences have helped her to analyse each case from various standpoints: âNow when I work on a case, I have the advantage of analysing it as a prosecutor, judge and defence lawyer. This helps enormously,â she points out.

Throughout her career, Drita has had the chance to work with different international judges, prosecutors and lawyers. Appreciating their tremendous contribution for the Kosovo justice system, she strongly believes that the time has come for Kosovars to take over. âI think we need to take care of this place on our own,â she firmly states.

Despite all the problems that Kosovo faces in the rule of law, Drita favours the transfer of competences from international to local authorities. Interference, threats, officialsâ public statements on ongoing trials, sophisticated methods of blackmail and intimidation are the many concerns that Drita raises. Nonetheless, she strongly believes that with a little more financial investment in the wages and medical insurance, the Kosovar judges and prosecutors can completely take over.

Going back to her early teenage years, Drita remembers how everyone in the family called her a lawyer. âAll my life I fought for fairness and equality. I always maintained the principle of justice. I fought for my ideals and never stopped believing that justice matters,â she says.

Her continuous fight with injustice and inequality is what keeps her motivated. âI cannot keep silent about things that are done wrong. People criticise me for lacking diplomatic skills, but this is who I am. I was born like this. I say what I believe in and I fight for it. I consider that silence is a crime, because it enables the crime in a very devious way,â she states.

The nature of her work requires her to keep a very low profile in public and a limited circle of friends, but she is content with being around close friends and family.

Balancing her daily workload with private life, Drita is very much organised. She enjoys visiting the fitness centre three times a week. âIt refreshes the mind. Itâs good for mental health,â she stresses. Letting out all the work pressure either at fitness centres or while hiking through nature during the weekends, Drita has learned to embrace her life-style and will continue to work hard every day, for a better rule of law in Kosovo.