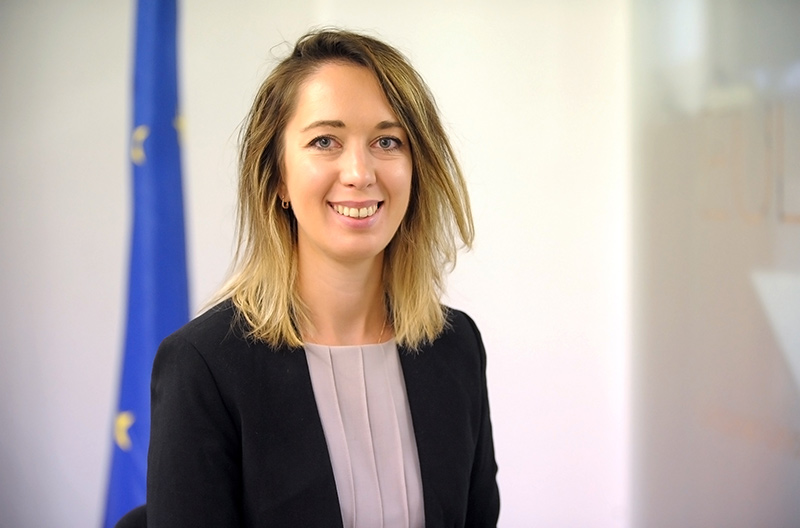 When lifeâs challenges are approaching, many would be preoccupied with fear and apprehension. EULEX legal officer Sandra Gudaityte, on the other hand, has only Trouble on her mind.  Trouble is her adopted stray cat, who will be accompanying her all the way from Kosovo to Ramallah next week as she begins a new step in her career. Her only fear as she prepares to leave Kosovo is finally admitting to her landlord that Trouble has shredded his sofa with her claws.

After a year and a half working for EULEX, Sandra is headed for the EU Coordinating Office for Palestinian Police Support (EUPOL COPPS) in Ramallah. Excited for what the future holds, she reflects on her time living in Pristina, working in EULEX and the path that brought her to Kosovo.

Sandra has been busy working in the Supreme Court and the Court of Appeals at the Palace of Justice in Pristina. As a legal officer, her job has been to review the cases and appeals coming before her, search for gaps or inconsistencies in the judgement, drafting legal opinions and advising the judges on the correct path to take. This work has been perfectly suited to Sandra, as a passion of hers has been to learn about new criminal legal systems, from her own domestic system in Lithuania, to the international criminal system, Kosovo law, and soon, Palestinian criminal law as well. She explains immediately what she loves about the job the most: âThe most interesting cases for me are war crime-related and corruption cases, the most serious crimes for which EULEX holds jurisdictionâ, she says. And she has a lot of work to do: the Court of Appeals sees so many cases of such diverse subject matter, it never stops being exciting. âIt can be difficult, sometimes, working on cases like theseâ, she says. âThe things you read are incredibly sensitive, and can be quite harrowing. I am worried sometimes that I would become less compassionate, and more cynical. This hasnât stopped me falling in love with the work!â

However, Sandraâs time in Kosovo has not always been spent behind a desk researching and writing appeals. When she first arrived in Kosovo three and a half years ago, she was working on assignment with the United Nations Development Programme (UNDP) as an Operations Officer as the Head of Unit within the Kosovo Property Agency (KPA). Working in evictions, Sandra was constantly in the field: engaging directly with individuals and being out of the office almost every day was a challenging but thrilling experience for a legal officer. âWorking in evictions with the KPA, I was completely out of my comfort zoneâ, she says. âBut I was able to gain so many skills here that I wouldnât have been able to learn anywhere else. In particular, working with the local police has seriously improved my conflict resolution skills. This is why it was so rewarding, being able to engage with all different kinds of people.â

The move to EULEX suited Sandraâs academic tastes a little better, however. She started off her legal career with a masterâs degree from her home country in Lithuania. âI fell into studying international criminal law almost by accident,â she explains. Rather than working as a lawyer at home, she was determined to seek out new challenges, studying in Belgium, The Netherlands and South Korea to complete her LLM in International Law. After months of hard work as an intern at the International Criminal Court in The Hague, Sandra was sure that she wanted to pursue an international career, and was able to land a full time position working there. âWorking at the ICC was a huge achievement for me. Part of me would love to go back, but after living in Kosovo and soon Ramallah, I have a feeling The Hague might be a bit boring for me!â

Sandraâs next career move will be working as a legal advisor within EUPOL COPPS. Her role will be catered towards monitoring and advising the police and the judiciary, as well as strengthening the cooperation between Israeli and Palestinian legal authorities. âMy work in EULEX and my work in KPA have really prepared me for this role, and Iâm ready to take these experiences Iâve had in Kosovo with me to Ramallah.â

âThe local institutions we help here are getting better and stronger every day, thereâs a reason EULEX is phasing out,â she comments. Sandra enjoyed being embedded into the Kosovo judiciary, particularly being able to see the cases she worked on being wrapped up. She felt like her work had real impact. Seeing the tangible results that were accomplished through her work as a legal officer in EULEX was incredibly satisfying. âIâve improved my legal knowledge and Iâve learned how to work under pressure, especially dealing with this huge case load in the Palace of Justice. The skillset Iâve learned working in a fast-paced environment like EULEX has been invaluable.â This is the perfect time for her to move on, taking everything she has learned with her to a new Mission with new challenges. âFor a legal officer especially, Ramallah will be a fascinating city to be able to work in.â

One aspect of her career in Kosovo she reflects on fondly is working with the local judges. Cooperating with them was an incredibly positive part of her work at the Palace of Justice. Sandra loved that she was never assigned to one specific judge, but has been able to work with many. âItâs really interesting to see how different judges work and engage with cases, and how their personalities and methods of working affect the way that the case is approached.â

In particular, she mentions the female judges. âThere were many female local judges I was able to work with, ones who were confident, with a formidable knowledge of the law. It was great to see that your success, even as a female judge, is based on merit.â

Reflecting on her own experience as a woman working in the rule of law, Sandra is positive about how much progress has been made towards gender equality, both in EULEX and the legal field generally. âAlthough most often the number of men working as legal officers is larger, it is positive, rather than negative, discrimination that you see towards the women who come into the field.â

âI think EULEX is doing really well in terms of ensuring that it maintains a gender equal perspective in all of the work that they do. In particular, they have a very well-formed gender focal point system that is keen to do good work towards gender equality, not just between the staff members but also in the work that EULEX carries out here in Kosovo.â

âThis does not mean that there isnât work still to do. I faced challenges as a woman working in other settings, but on the whole, there hasnât been an obstacle I couldnât face on my own.â

Sandra explains that she owes a lot of her success in her career to her parents who, like her, were determined to succeed, no matter the obstacles. âMy parents grew up in a time when Lithuania was still part of the USSR. Back then, if you werenât from an influential family, you werenât able to get anything close to a good education. At first, my mother was an accountant and my father a police officerâ, she explains. âI was five years old when the wall fell. After we gained independence, they went back to university. My mother is now an economist, and my father completed his law degree.â

Both her parents encouraged her to work hard and succeed. They were not only supportive of Sandra pursuing her career in law, but also going abroad to do so. âTheir support was so helpful, but to be honest, I didnât need so much encouragement. For as long as I can remember, Iâve always wanted to be a lawyer!â

As she prepares to move away after three and half years in Kosovo, Sandra says she will miss Kosovoâs nature the most. Here, she was able to explore her love for the outdoors. âBecause of my surroundings, I became so much healthier during my time living in Kosovo. Iâve had a hard time standing still since I moved here!â she says. Arriving in Pristina from the Netherlands, she came from a country where the highest peak is around two hundred metres. âOne day, when I first arrived, a colleague dragged me out hiking with her, completely unprepared. It only took one trip and I was hooked. I got myself some proper gear and threw myself into the sport.â

Rain or shine, you would find Sandra in the mountains. Kosovo not only cultivated her love of hiking, but photography as well. âWeâre surrounded by so many different mountain ranges here in Kosovoâ, she says. âThey all have completely different kinds of nature and landscapes to experience, and not just in summer! I remember almost getting trapped in a snowstorm up in Germia, all for the sake of some wonderful photographs.â Most importantly, Kosovo was where she found her cat, Trouble. âForget about me, getting him to Ramallah has been my number one priority!â

Sandra has great expectations not just for this next stage in her career, but also for the new life that she will create for herself in Ramallah. âIt was so easy moving from the ICC and The Hague to Pristina, but I think Ramallah will be a whole different story. Iâve become so accustomed to life in Kosovo, but Iâm excited to find new pleasures and new experiences, and to make a new home for myself.â