Niina Koivisto: âTo get ahead, think outside the... 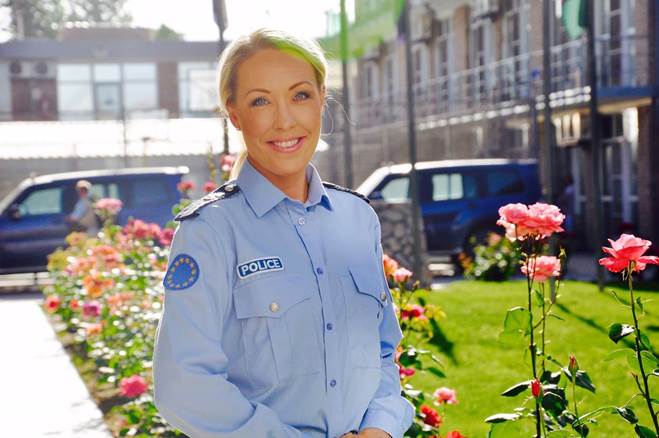 A positive attitude, passion and determination shine through the police uniform of Niina Koivisto,   one of EULEXâs Advisors to the Kosovo Community Police. Joining EULEX after rising through the ranks of the Finnish National Police Board and the successful completion of her mission in EUPOL Afghanistan in 2016, Niinaâs message for all women working in the rule of law rings clear: âWork hard, and you will succeedâ.

Niina grew up with two brothers in a traditional Finnish countryside family. âMy family has nothing but the full support for me for my chosen career.  This has not always been the easiest choice.â Her late grandmother was an especially influential character in her family who always highlighted the importance of studying and working hard, gender equality and that women are capable for anything.

At only 20 years old, she began ambitiously pursuing her career in law enforcement straight after high school. Having she graduated from the police academy at a young age and working her way through different departments of the Finnish police force, she successfully completed her legal studies earning a Masterâs Degree in Law. âI knew that if I wanted to stand out from the others, I had to go the extra mile,â she says.

According to Niina, working in male-dominated police forces has definitely not always been easy. âYou are paid more attention because you are a female. But, I have always been 100% myself and have never changed my look or behavior because of my work. I have been tough when it has been needed and especially when facing something which is not correct or lawful.

âYou succeed best by being truly yourself. In my home country of Finland, I have faced very good and supportive superiors and have been treated fairly overall. My experience in an international environment has been more challenging. I am very energetic and can adopt new responsibilities quickly.  I always try to work in a creative way,â Niina emphasizes.

From her work as a police officer in various police regions and units, to becoming a detective and working in the Counter Terrorism Unit for the Finnish Security Intelligence Service, even now, Niina continues to pursue academic success alongside her professional policing career. With a view to combining her diverse experiences over the last fifteen years, she is currently a PhD candidate at the University of Helsinki. This is just one more goal she has set for herself: she stresses the importance of embracing your own ambition, different skills and experiences in professional life, and maintaining a novel and creative approach to all aspects of her life and work.

After spending seven years in the higher leadership ranks at the Finnish National Police Board, the Finland police headquarters as well as a working as a judge in the Court of Law to understand the whole chain of criminal justice,  Niinaâs ambition naturally drew her to the international realm. âIâm so thankful to have had the opportunity, both in EULEX in the Balkans and in EUPOL in gorgeous Afghanistan, to work, study and adapt to diverse geopolitical situations and multi-ethnic communities,â she says. âParticularly when working as a community police advisor, this kind of experience and engagement with people is invaluable.â

Niinaâs primary role at EULEX involves advising the senior management of Kosovo Police on a strategic level as to the implementation of EU best practices. A native of Finland, a country considered having one of the best-ranked law enforcement agencies in the world as well among top three rule of law index, her experience at the strategic level is indispensable to the effective functioning of EULEXâs advisory role to the Kosovo Police.

âIncorporating EU Internal Security Strategy, alongside Finnish Police best practices like strong dialogue between the police and the community, the differences between external and internal security, and close Police, Border Police and Customs collaboration are the elements that I have been especially engaged here in Kosovoâ, says Niina.

A big part of her daily work back home at the Finnish Police Headquarters involves working with the Chief Superintendent, at the leadership level, on advising the National Police Commissioner and the Deputy Police Commissionersâ as well as coordinating different strategies.  This includes as well police performance and action plans ( for example,e crime prevention, criminal investigations, public order and security, international policing, peacekeeping) and turning them into after action reports back to the Police Commissioner and ministerial level on the performance and the outcomes of the police. Last bigger effort was to represent the Finnish Police in the parliamentary level preparation of the Intelligence Act for Police and for Intelligence Service. Niinaâs national work includes many interesting areas beneficiary for strategic level police advising.

Now in Kosovo, Niina has found her experiences and working relationships since she arrived incredibly rewarding. âWorking within community policing and monitoring, mentoring and advising is all about learning how to build trust and respect, as an individual and as a Advisor. I will take positive memories of working with individuals in the Kosovo Police and the high importance of our local staff at EULEX back with me back to Finland once my Mission is over and I really I hope I am remembered as a very active and professional police advisor among Kosovo Police and our colleagues, â, says Niina.

On her spare time in the beautiful Balkans, besides reading and studying, Niina  enjoys most moving in the nature with sports: hiking or skiing. âNicest weekend ever in Kosovo I have spent in Brezovica or other wild mountains with the clear blue skyâ, she points out.

Niina emphasizes the importance of relationship-building and respect when working in missions such as EULEX. âThe principle of local ownership of is something that the international community must always remember. EULEX is the instrument through which we have been able to cooperate and communicate with Kosovo institutions, and the relationships you are able to create and sustain are what determine the Missionâs success.â