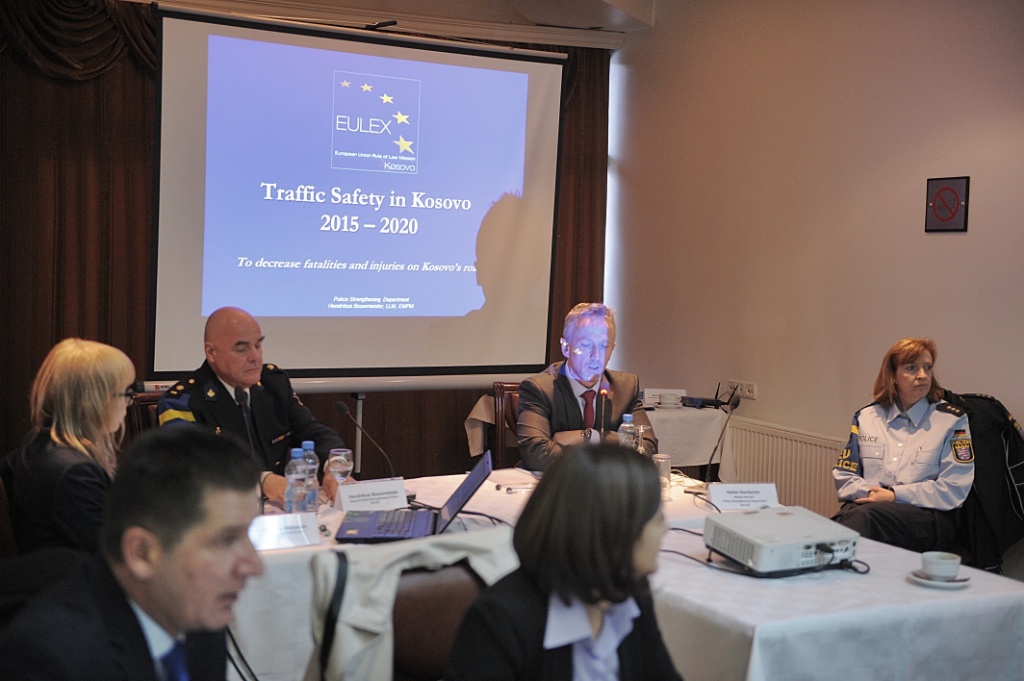 Yesterday, EULEX facilitated a roundtable discussion on road traffic safety in Pristina. The roundtable was opened by EULEX Deputy Head of Strengthening Division, Martin Cunningham and attended by Deputy General Director of Kosovo Police Naim Rexha. The roundtable brought together government representatives and local police officers, prosecutors and judges from all regions of Kosovo to jointly develop recommendations and solutions to improve road safety.

Martin Cunningham opened the workshop by elaborating how the effective improvement of traffic safety is a massive opportunity for Kosovo’s rule of law institutions to engage the community in a positive way. A lecture by an EULEX expert underscored that the poor traffic safety record resulted in over 150 yearly fatalities, which is very high proportionally to Kosovo’s population. The EULEX expert represented how Kosovo institutions also lose millions of euros annually as the result of ineffective implementation of fines and how an effective fining system is as a strong deterrent against traffic violations.

The main aim of the workshop was to lay the groundwork for a holistic approach to road safety, through three themes; Environmental/Engineering, Education and finally Enforcement, of which a focus was the payment of fines. Representatives of Kosovo Police, prosecutors, judges and ministries of justice and internal affairs worked together in a proactive manner throughout the day. The workshop produced numerous recommendations regarding a new system and its legal framework.

According to statement given by the Deputy General Director of Kosovo Police, Naim Rexha, the workshop was of highest importance given the current condition of traffic safety in Kosovo. Rexha emphasized the need for an effective system of fining. According to Rexha, the establishment of a new system requires effective cooperation between different Kosovo institutions. Rexha also highlighted the need for a better awareness of traffic rules and safety among the citizens and improved legislation regarding traffic violations.

The process will continue, and in the future EULEX will facilitate another meeting in which a new fine collecting system and the timetable for its implementation will be presented.