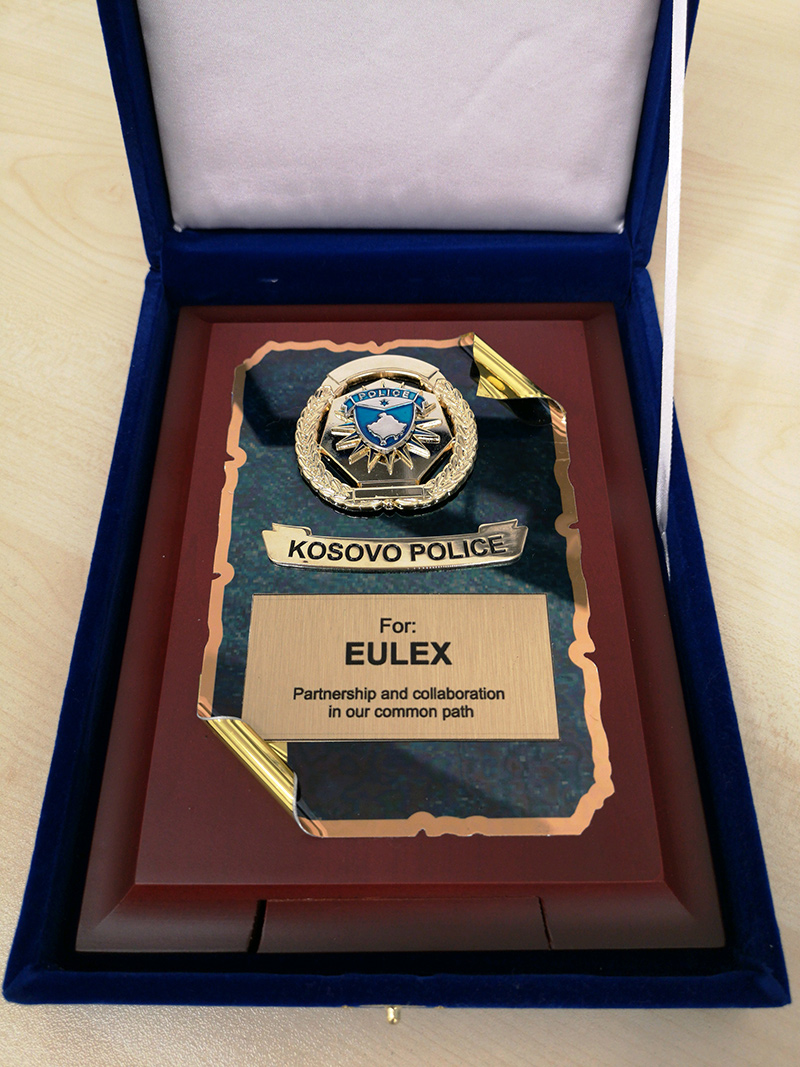 The Acting Head of EULEX, Bernd Thran, attended today an official ceremony to mark the 20th anniversary of the establishment of the Kosovo Police, during which EULEX received an award in appreciation of its partnership and collaboration.

âIt gives me great pleasure to extend my warmest congratulations to the Kosovo Police on the 20th anniversary of its establishment. In these 20 years, Kosovo Police has constantly grown to become one of Kosovoâs most trusted institutions â a success EULEX is very proud of.

I would also like to take this opportunity to thank the Kosovo Police for presenting EULEX with an award in appreciation of the partnership and collaboration on our common path. Indeed, since 2008, EULEX has been working shoulder to shoulder with the Kosovo Police and has significantly contributed to its professionalisation and success through monitoring, mentoring and advising activities.

In our 11 years of cooperation, I would like to highlight that EULEX has also played a key role in the integration of the police in the north. Today, EULEXâs Senior Police Advisor in the north maintains good relations and advises Kosovo Policeâs Region North Directorate and the four police stations under its command.

After successfully handing over all police case files to the Kosovo Police, EULEX police monitors at the Kosovo Police level, with a focus on thematic areas of crimes under international law, gender-based violence and hate crimes, and provide expertise and advice on addressing those issues in a coherent manner. I would like to thank the Kosovo Police for the excellent cooperation in this field.

Moreover, the Missionâs experts have assisted the Kosovo authorities in a long and technically challenging process of establishing the permanent Common Crossing Points hosted by Kosovo, which were agreed to under the auspices of the EU-facilitated Pristina-Belgrade Dialogue.

In addition, EULEXâs Formed Police Unit maintains its capability as a second security responder in Kosovo and carries out regular training sessions with the Kosovo Police and KFOR, including on improving Kosovo Policeâs crowd-and-riot-control capabilities.

Our Mission also continues its facilitation of international police cooperation matters with the Kosovo Police and fosters its capacities through targeted projects and study visits designed to help its International Law Enforcement Cooperation Unit.

To conclude, todayâs milestone is not only an opportunity to celebrate the joint work that has been done and highlight the strong partnership that has developed since 2008, but also an opportunity to commit to continuing and strengthening our cooperation with the Kosovo Police.

I wish Kosovo Police every success in fulfilling its mission to provide professional, effective and efficient law enforcement in Kosovo.