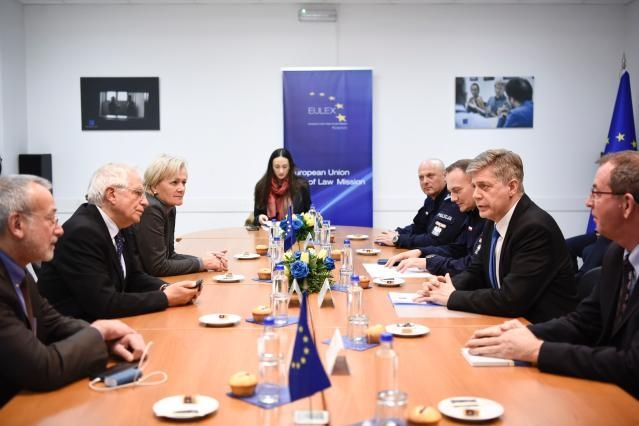 On 30 and 31 January, High Representative/Vice-President Josep Borrell visited Kosovo for the first time.

He had an open exchange with President Hashim ThaÃ§i, stressing that the European Union is not complete without the Western Balkans. The EU and the region need to advance together. Josep Borrell stressed his personal commitment to facilitate the Belgrade - Pristina Dialogue and offered his full collaboration.

In a meeting with Kosovoâs political party leaders, the High Representative discussed the importance of working together to contribute to democracy, functioning institutions and progress on the European path as well as to advance on the Belgrade - Pristina Dialogue. He underlined that the European Union would encourage Kosovo to form a government as quickly as possible, to start working on the process.

During his visit, Josep Borrell launched a major EU-financed project to improve the environmental performance of the Kosovo's largest electricity generator. The â¬76.4 million project will significantly lower emissions - by reducing harmful dust by 35 times, contribute to reliable and clean energy supply, and improve the health and well-being of the population.

Josep Borrell further visited the city of Prizren, where he met with representatives of local communities. He engaged in discussions about history, culture and society.

The High Representative also met with representatives of civil society organisations to discuss the most pressing issues people of Kosovo are facing today.

He also had an opportunity to meet with the European Unionâs civilian Common Security and Defence Policy mission EULEX Kosovo who provided the High Representative with an overview of its work in contributing to assist Kosovo in establishing sustainable and independent Rule of Law Institutions.

In an exchange with NATO KFOR Commander General Risi he also received an update on the security situation and the well functioning cooperation between the international presences of NATO and the EU in Kosovo.

Audiovisual coverage of the visit is available on EbS.

Today, the High Representative will continue his visit to the Western Balkans with bilateral meetings in Serbia.