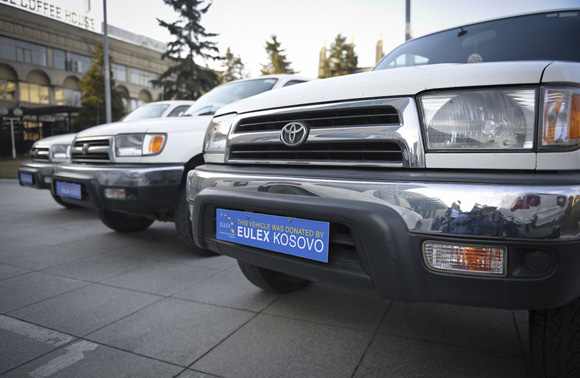 EULEX has handed over twenty-three vehicles to the Ministry of Justice, as a donation for the Kosovo Correctional Services.

The handover ceremony was attended by the Head of EULEX, Xavier de Marnhac and the Minister of Justice, Hajredin Kuci.

âThere are many ways in which EULEX can assist the Kosovo institutions to improve their capacity to achieve their tasks more easilyâ, said de Marnhac during the ceremony. "We can do this through mentoring, monitoring and advising, we can do this through training, but we can help also as we are doing today through providing additional equipment that is of significant value to these institutions", he added.

Hajredin KuÃ§i thanked the Head of EULEX, saying the vehicles would prove to be very useful and would help in capacity building at the Ministry of Justice, in particular the Kosovo Correctional Service. "Our goal is to improve the environment for law and order, and to improve the conditions of people working in this directionâ, said Kuci.