Heaton: EULEX for its part will continue to fight...

Heaton: EULEX for its part will continue to fight corruption 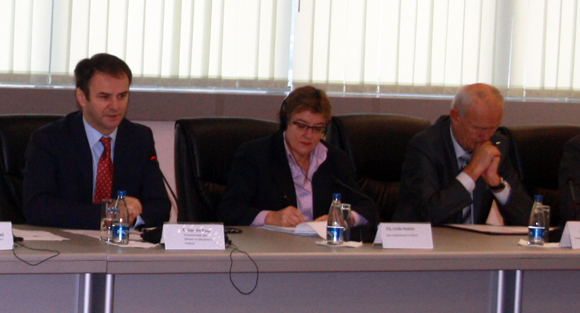 The Acting EULEX Chief Prosecutor, Linda Heaton, today participated in a round table to mark the International Day Against Corruption organised by Kosovoâs Prime Ministerâs Office on Good Governance and the Anti-Corruption Agency.

She told the panelists, which included members of the Kosovo government, rule of law institutions, and the civil society, that EULEX is aware of the raised high expectations and the demand of the people for the mission to fulfill its mandate.

âWe welcome the Governmentâs initiatives. Now it is a question of proper implementation of them. EULEX for its part will continue to fight corruption, bring cases to court in a dogged and determined manner to stamp it down as far as possible. We have brought a number of indictments, and there are others pendingâ, said Linda Heaton at the round table. âWe will keep pushing on and take the fight to criminals who would seek to undermine Kosovoâs institutionsâ, she added.

Heaton said that EULEX can and will do more, and that this will be done by working with our local counterparts, the Chief State Prosecutor, Mr Kabashi and Mrs Drita Hajdari.

EULEX has 24 prosecutors working together with their local counterparts at the Chief Prosecutorâs Office, Kosovo Special Prosecution Office (SPRK) and in five districts.