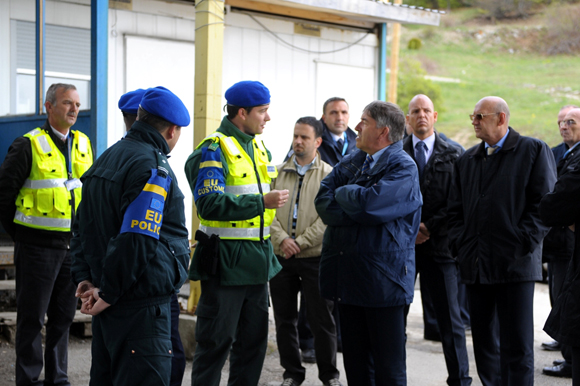 The Head of EULEX, Xavier de Marnhac, visited Peja/PeÄ to get to know better the region and the work of the mission on the ground. De Marnhac met with EULEX members of the three components and their local counterparts.

In Peja /PeÄ, de Marnhac met Nedzat GutiÄ, the Deputy Regional Director of Kosovo Police (KP) and discussed cooperation between EULEX and Kosovo Police and the challenges ahead in the region.

At the Police Station de Marnhac said: âI am very happy to have this opportunity to visit the regional station, to have a look at our cooperation and partnerships in Police and Justice, meet with EULEX people and see how much we can support the Kosovo Institutions, so they can improve their efficiency for the sake of the people of Kosovo, because what is important is that people benefit from the commitments of the Mission.â

De Marnhac continued his visit to the Peja/PeÄ Office of the Kosovo Prosecutor Agron Galani and the Office of the President of the District Court, Mr. Mekaj.

During the one day tour in the Peja/PeÄ region, de Marnhac also visited the Kulla/Kullina border crossing point where he met with border police, customs officers as well as EULEX monitors.

The Head of EULEX will continue to visit different regions of Kosovo in the future.