De Marnhac emphasises the importance of the north of Kosovo 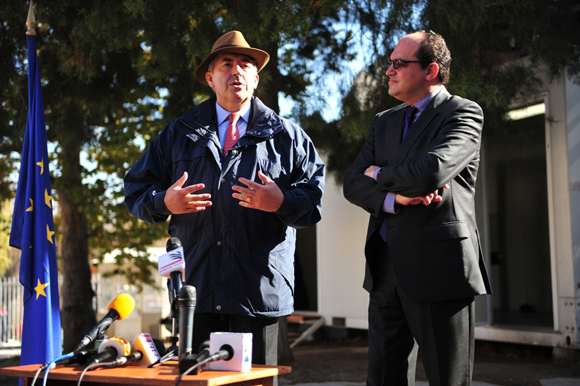 The EULEX Head of Mission Xavier Bout de Marnhac has completed a two-day visit to the north of Kosovo. It was his first trip to the region since he took over the position as Head of Mission. The aim was to gain a first hand knowledge of the current situation on the ground and the work there of EULEX staff from the Police, Justice and Customs Components.

De Marnhac began his visit at the northernmost point in Kosovo, Gate 1, where he was briefed by EULEX Customs and Border Police Staff. EULEX staff are the only customs officers present at both Gates 1 and 31. They have played a key role in dramatically decreasing the level of smuggling.

At Camp Belvedere, de Marnhac met the French Formed Police Unit (FPU) which demonstrated riot control capabilities. EULEX police officers, serving as second responder after the Kosovo Police, have been deployed on many occasions to deal with various demonstrations around Kosovo.

De Marnhac also visited a joint EULEX-KP check point â an example of the increased activities and presence in the north.

âIâm happy that the court has been functioning for more than a year, providing some important results. Twenty-four verdicts have been delivered by EULEX judges under working circumstances that are far from ideal. But it is now very important that the court becomes fully functional and that means the return of local judges and prosecutors,â said the Head of Mission.

After a joint visit to the EU House with the Facilitator for the North, Italian ambassador Michael Giffoni, de Marnhac at the press point stressed the importance of re-establishing rule of law in this part of Kosovo.

âMy intention is increase the presence of EULEX in the north of Kosovo in order to combat organised crime. This will benefit everyoneâ, said de Marnhac.