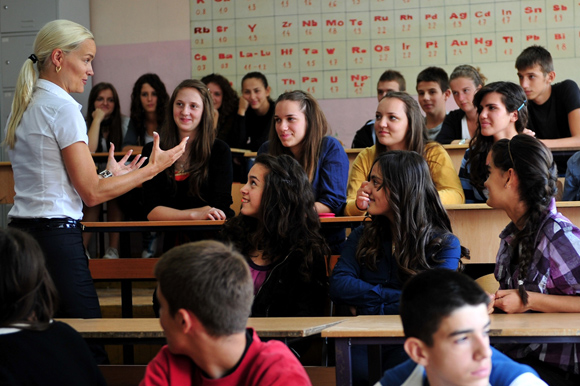 Following up on the last yearâs outreach activities of EULEX to inform the youth in Kosovo, the EULEX Press and Public Information Office (PPIO) with the support of the Ministry of Education of Kosovo, started a new cycle of visiting schools and youth Non-governmental organisations (NGO) throughout Kosovo.

âSami Frasheriâ was the first school to be visited by an EULEX team today. The team met about 50 students attending the 10th grade at this school, where they underlined the importance of improving the rule of law in Kosovo, which is the mandate of EULEX, as another step forward towards the European Union perspective for Kosovo.

âThis event was an eye-opener for meâ, said Alma, a 15 year old student. âIt is so good to learn that EU has put such a great effort to the European perspective of my countryâ.

The aim of these visits is to establish a closer relation to youth, which comprises a large proportion of the Kosovo population. The opportunity for the EULEX memberâs to meet with the youth opens the possibility to communicate directly with one-another. As the lectures are in an interactive form, the students have the opportunity to ask questions not only about EULEX, but also about the Kosovoâs journey towards the European Union.

âWe hear everyday in our media about EULEX. Sometimes we understand something but sometimes we get really confused. Today EULEX has given me a chance to understand many things about this mission, but most importantly about the importance of rule of law in our journey to the EU familyâ, said QÃ«ndresa, a student of this school.

Previous year, EULEX staff members visited about 46 schools and youth NGOâs all around Kosovo, including the northern part of Kosovo. More than 2,000 students and youth activists participated at the lectures.

This year EULEX plans to visit some 25 schools and youth NGOâs as part of its outreach activity to inform the youth in Kosovo about its EU perspective.