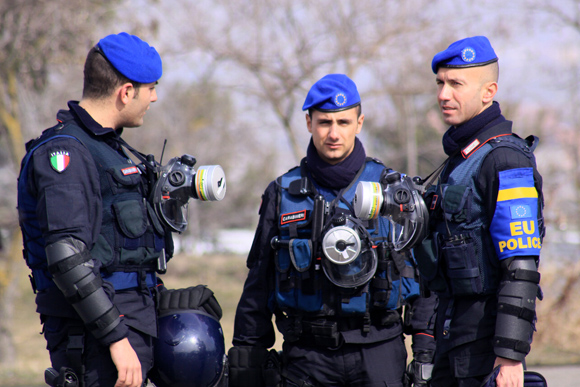 Nine Carabinieri police officers from the Italian EULEX FPU (Formed Police Unit) were having dinner down town Pristina last Saturday on the occasion of their end of tour of duty of the EULEX mission.

Suddenly, in the middle of their meal, they heard some explosions erupting in the street. A lot of people began streaming into the restaurant with scared expressions on their faces.

Instantly, the Carabinieri rushed out of the restaurant to see what the mayhem was all about: they noticed two men, one with a gun in hand, running away. Meantime many people were gathering in the middle of the street. The nine Carabinieri , off duty and unarmed, began running after the two men, who, they figured, were clearly intoxicated or high on drugs, and therefore posed a threat to the public order.

After a short intensive pursuit, the Carabinieri, managed to overpower the two men, incapacitated them, seized the gun, and waited for the arrival of a KP patrol to arrest them and take them to the nearest police station. A local prosecutor later on ordered their detention.

This was clearly a courageous act and a grand finale to their tour of duty!