Progress Report: an x-ray to the system 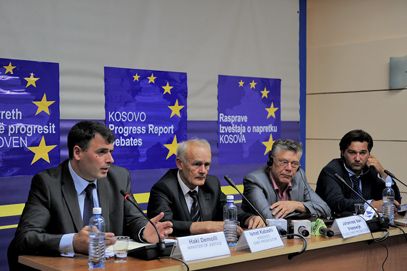 Organized by the Media Centre and the office of the special representative of the European Union in Kosovo, the representatives of EULEX and the Kosovo institutions participated in the third debate on the European Commission Progress Report for Kosovo, focusing on the rule of law area.

âLast year, and this year as well, the Programme Report of EULEX will serve as an integral part of the Progress Report of the European Commission since we are the eyes and ears of the European Union on the field and at the central level when it comes to rule of lawâ, said Alessio Zuccarini, the Head of EULEX Programme Office. âThe report focuses on the changes â what has been done, what needs to be done, and what has not been doneâ, he added.

Last year's Progress Report identified the challenges and shortfalls of the rule of law in Kosovo, just as the first Programme Report of EULEX did, which mapped the situation on the ground and provided recommendations for improvement. While the police and customs have achieved gradual progress, according to the EULEX report, the judiciary has been lagging behind.

âThe progress report is like an X-ray, revealing the shortcomings in Kosovo, and one of them is the judicial systemâ, said Johannes van Vreeswijk, the Acting Chief Prosecutor of EULEX. âThe system is weak, vulnerable to political influence, and inefficientâ, Vreeswijk quoted the report, however, he said that current cooperation between EULEX and the justice institutions gives reasons to expect positive changes in the judicial system.

Ismet Kabashi, the Kosovo Chief Prosecutor pointed out the main handicap for the Kosovo prosecution system, which according to him has poorly performed in the fight against corruption, while there has been lack of coordination and cooperation with the police and other agencies that fight crime. The lack of legislation on judiciary and prosecution was another weakness that Kabashi mentioned. âThe approval of this legislation is vital for the prosecution system, as it ensures permanence of prosecutors in their positionsâ, said Kabashi.

The conclusion of the panellists at the debate was that reforms were difficult to implement and cannot be achieved overnight.

âTransparency and accountability are not empty words, they should be transformed into actions and the people should actively participate in itâ, concluded Zuccarini.

Progress Report: an x-ray to the system
">

Progress Report: an x-ray to the system
">