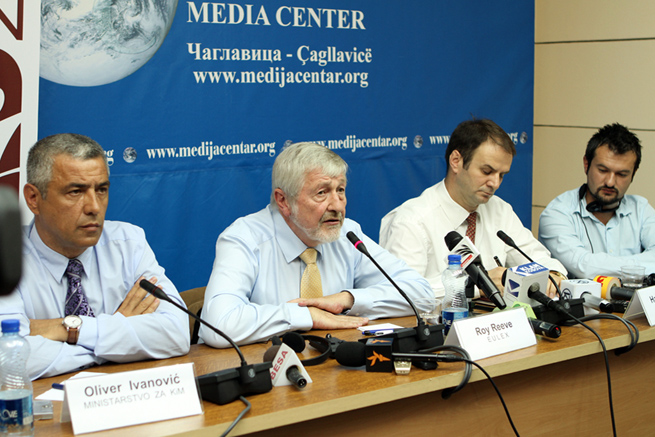 The Deputy Head of EULEX, Roy Reeve, participated in an important debate regarding the security situation in Kosovo. It was held at the Media Centre in Äaglavica/CagllavicÃ« and the other participants were Hajredin Kuqi, Deputy Prime Minister of Kosovo, and Oliver Ivanovic, State Secretary of the Ministry for Kosovo and Metohija in the Serbian Government

Organised by the Kosovo Strategic Action Network, a network of more than 60 Kosovo Serbian NGOs, the aim of the debate was to assess the recent incidents in the north of Kosovo and the potential steps to be taken in order to calm down possible tensions.

âEULEX is trying to build up the rule of law in four main areas in the north. The first and most important is to restore full operations at the District Court in north Mitrovica. It a huge humanitarian issue. The second area is to reinstate customs checks at gates 1 and 31. The third is to support the local police with our EULEX presence in every police station in northern Kosovo. And the fourth is to use our executive powers when and if needed. All this will contribute to the security and stability situation,â said Reeve.

Hajredin Kuqi pointed said that the rule of law should be implemented in the whole of Kosovo. He said the Government had a strategy for the north supported by the ICO, and the Kosovo Government had an obligation towards all the people, including the Serbian community, to secure peace and order throughout Kosovo.

Oliver Ivanovic stressed that all communities should take the opportunity of the international presence in Kosovo to start talking about every day problems. ââItâs not good when any side takes unilateral actionââ, said Ivanovic.