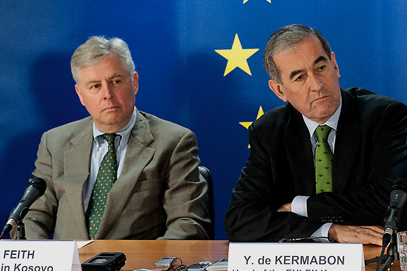 EULEX Head of Mission, Yves de Kermabon, and the EUSR in Kosovo, Pieter Feith, met with media today in Brussels after both of them briefed the EU Member States in the Political and Security Committee on the latest developments in Kosovo and the work of the EULEX Kosovo mission.

Yves de Kermabon was happy to announce that the mission he is leading was given the full support from all 27 member states, especially for the latest concrete steps taken in the fight against corruption and in addition HoM could also inform the journalists that the decision to extend the missionÂ´s mandate for two more years had just been taken the same day.

HoM highlighted three main topics that the mission has been focusing on lately: âThe fight against corruption, local ownership and progress in the area of war crimes and missing persons are really a focus for the EULEX missionâ de Kermabon said. âThe mission is seriously committed to fighting corruption and the latest searches are concrete examples of our real determination.â HoM continued by highlighting some of the weaknesses and challenges in the Kosovo rule of law institutions as presented in the latest EULEX Program Report that the local institutions will have to deal with, but at the same time he underlined that progress have been made and he praised Prime Minister Thaci for his maturity shown when his Government was faced with searches in one of its ministries.

Pieter Feith mentioned steady progress on two fronts: institution building and the consolidation and strengthening of a multi-ethnic democracy in Kosovo. He furthermore reminded the media of that similar operations, such as the searches carried out by EULEX lately, has not been taking place in Kosovo during the past ten years. He also highlighted the fact that the Kosovo Government has now taken a lead in fighting corruption. Something which is a very positive development. Feith continued by talking about the Northern part of Kosovo: â The North will not be left behind. EU is and will play a major role in promoting social-economic development and rule of law. The north will be part of the European perspective, as it is for Belgrade and Pristinaâ In connection to the upcoming ICJ advisory opinion Feith expressed that this is an opportunity for both sides to use it constructively and to engage directly on practical matters.