A model for good inter-ethnic relations 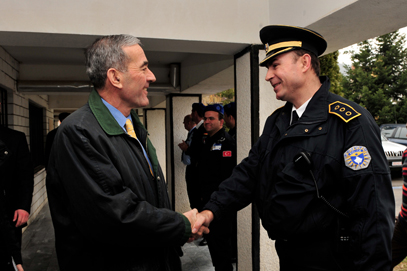 The Head of Mission Yves de Kermabon together with the Head of EULEXâs Police Component Udo MÃ¶ller have visited Dragash/DragaÅ¡ Kosovo as part of their continuing outreach activties.

Their first stop was a visit to the Dragash/DragaÅ¡ Municipality where they held talks with the local authorities.

The Mayor Salim Jenuzi gave an overview on the region underlining the areaâs multiethnic character which is unique to Kosovo. âIn general the situation here is calm thanks to the local population. Relations between different communities living here are good. Their co-operation with the municipality and also the police is based on mutual respect.â

The commander said EULEX police and the local police worked well together. âBut despite the relative calm and peaceful situation here,â he added, â There are some areas where the police has to increase its efficiency especially in community policing.