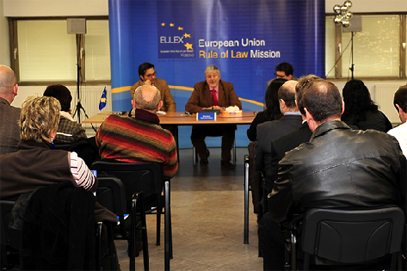 âWe need your feedback on how you see us from the ground, with no punches pulledâ Roy Reeve, Deputy Head, EULEX, told a group of civil society NGOs gathered at a EULEX workshop.


The workshop was aimed at explaining the methods by which EULEX mentors, monitors and advises (MMA) local colleagues and how this will lead to long term improvements in the work of the local police, customs and justice systems.

At the heart of this process are the so-called MMA âAction Fichesâ (or âaction strategiesâ). They have been created following the recommendations of the EULEX Programme Report (July 2009) based on 2,500 assessments by 400 monitors of the MMA work by EULEXâs 3 components, Police, Justice and Customs.

The Action Fiches are strategies aimed at addressing the problems identified in the Programme Report.

In his introductory remarks to the workshop, Alessio Zuccarini, the Head of the EULEX Programme Office, stressed the need for EULEX and the NGOs âto build a stronger partnership based on participation, transparency and communication.â This meant contributing to the implementation of the Action Fiches.

The workshop, to which 40 NGO representatives had been invited, was hosted by EULEX and representatives from the Ministries of Justice, Internal Affairs and Economy and Finance.
This MMA partnership between EULEX and civil society was formally approved by the Joint Rule of Law Coordination Board meeting held on 17 November 2009.
Alessandro Tedesco, EULEX Programme Manager for Civil Society/NGOs, said EULEXâs policy of transparency âconstituted our benchmark to keep you updated. We need your support for our second benchmark â cooperation.â

Ms Behm gave a brief presentation on the KJC which was established in August. Already, the Office of the Disciplinary Council has transferred 235 cases of alleged judicial misconduct to the KJC, a large number considering Kosovoâs approximate 300 judges and 200 prosecutors.

Fatmir Rexhepi, the Head of the KJC Secretariat which oversees the Court Case Management Information System, said: âThis system can guarantee transparency in case allocation to judges. This constitutes one step ahead in safeguarding the independence of the judiciary.â

Hydajet Hyseni, Head of the Judicial Audit Unit, said his unitâs mandate was to propose reforms to change the legal system. To date 21auditing reports, submitted to the Kosovo Assembly, Ministry of Justice, KJC and EULEX, had been made containing 233 recommendations, and he called on civil society to help implement them.

The tendency for political interference in certain cases means that the KJC is especially vigilant in this regard: it has dismissed judges and is also seeking budgetary outlays to provide them security. Ms Behm spoke of the need to increase the representation of women and minorities in the judiciary.

During the Q and A sessions several questions were fielded, including by the Directors of the Kosovo Rehabilitation Centre for Torture Victims, Centre for Conflict Management and Council for Protection of Human Rights.