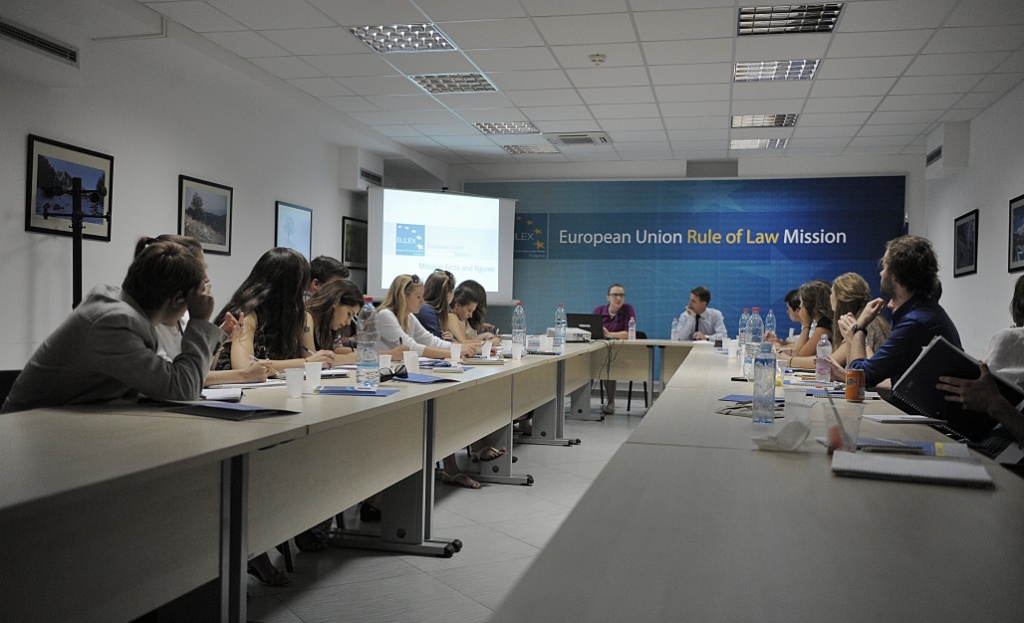 Eighteen students from the University of North Carolina, Chapel Hill visited EULEX in northern Mitrovica this week. The students, on a six week educational tour focusing on peace and state-building processes in the former Yugoslavia, are currently in Kosovo at the mid-point of their trip with Bosnia and Herzegovina to follow. Endeavoring to learn more about strengthening local institutions and the rule of law, they engaged in field visits to a number of international organizations, including EULEX.

During their visit to Mitrovica, they visited EULEX offices at the EU House where they received a briefing by Michael Sim, Acting Chief Regional Advisor to KP Chief of Operations, Ian Bancroft, Coordinator North, and Dane Koruga, Press and Public Information Communications Officer. Michael Sim spoke about EULEX’s Police Strengthening Department and its collaboration with Kosovo Police, while Ian Bancroft and Dane Koruga briefed the students on the Mission’s mandate and its aim to strengthen the rule of law in the north of Kosovo.

After their journey in Mitrovica, the students also visited Pristina – EULEX Headquarters, where they were received by the mission spokesperson Besa Domi and Political Reporting Officer, Naim Hajdari. After a general overview on EULEX’s work done so far, its achievements and mandate by Mrs. Domi, Mr. Hajdari followed with an outline of the political landscape in Kosovo. As a special lecture, and upon the enthusiastic interest of students, the Head of War Crimes Investigations Unit, Mr. Matti Raatikanen, spoke about the work procedures of the war crime unit.