The distinguished speakers who have already spoken this morning highlighted the fundamental role of a professional, independent, impartial and objective prosecution service in any rule of law system, in particular here in Kosovo.

Under its current mandate. EULEX is engaged in in-depth monitoring of the whole justice chain in Kosovo; following cases from the investigation and prosecution phase until the execution of the judgment as well as the conditions in the correctional services.

Our monitoring would not be possible without the commitment and professionalism of our Kosovo counterparts including in the prosecution offices.  And I would like to pay tribute to the many prosecutors who do seek to carry out their duties in a professional, responsible and objective manner.

We are here as partners. In fact, we are often asked by prosecutors to monitor certain of their cases, in particular when there is undue outside influence on the legal proceedings.  Prosecutors need to feel safe from such interference â whatever form it may take.

One factor that has not yet been mentioned this morning, although the Minister of Justice alluded to it, is what I would term âthe fear factorâ.  Both prosecutors and judges are still often exposed to various forms of intimidation, threats and even outright attacks, especially when they are dealing with influential defendants.

To have active prosecutors pursuing cases involving influential defendants, they and their families need to feel safe.  In the same vein, witnesses need to be protected and their safety must be guaranteed for criminal justice to prevail. A judiciary directly influenced by outside actors and forces can never be independent and impartial.

Any discussion on strengthening the integrity, professionalism, independence and impartiality of the prosecution system, cannot ignore this âfear factorâ.  If prosecutors feel and are sufficiently protected, they will also be more efficient.

The question is therefore not only how to ensure the performance and integrity of prosecutors meet the highest standards, but also how to make sure that prosecutors and judges are protected against undue pressure, intimidations and threats to themselves and their families.

In our âJustice Monitoring Reportsâ, the last which was issued in the middle of December, we highlighted a number of practical findings and recommendations regarding the prosecution.

First, the quality of investigations, the strength of indictments and commitment of prosecutors throughout all stages of the criminal procedure are essential to the successful prosecution of crimes.

It may seem obvious, but our monitoring revealed that high profile investigations, including serious crimes involving corruption, often suffered delays, setbacks and even ended up being closed without exploring all possible leads. Why? The prosecution is simply not sufficiently active, or it is lacking in resources.

While many prosecutors do vigorously defended their cases and indictments in court, others come less well prepared, showing limited commitment.  And all too often they did not even appear in court without providing a justification for their absence.

This is an unacceptable practice, resulting in a number of âunproductiveâ hearings having to be re-adjourned.  It is a waste of time, not only for an already overburdened judiciary with a large backlog of cases but also for Kosovo citizens and tax payers.

Here I would put âthe burden of proofâ rather on the judges who are allowing this practice to continue.  It is simply not acceptable, for instance, that a defense lawyer says he or she is too busy when a hearing has been scheduled well in advance. Such practices should result in a written warning and report by the presiding judge overseeing the trial.

As for the prosecutors, they need first of all to appreciate the victims of crime; victims of crime are not just passive actors, they are holders of rights; they have a right to justice, to reparation, to protection from further harm. And prosecutors have a vital role to play in upholding these fundamental human rights.

Gender-based violence are cases in point. And our monitoring is revealing how in many cases of rape, the referral procedure of victims to the Institute of Forensic Medicine for medical examination and acquisition of biological evidence, remains inconsistent and often depends on the level of engagement of the prosecutor in charge.

This is unacceptable. And our Mission is therefore supporting the Kosovo institutions in drafting a protocol for the referral of victims of sexual violence in line with the Council of Europe Convention on combating and preventing violence against women and domestic violence â better known as âthe Istanbul Conventionâ.

While any form of discrimination in the legal system based on gender, ethnicity or social class is unacceptable, we should not ignore that a prosecutor who is overwhelmed with work cannot deliver results. Authorities therefore need to ensure that the different Prosecution offices across Kosovo are sufficiently staffed, not only with prosecutors but also with qualified legal officers and supporting staff, including sufficient translators and interpreters for minority languages.

The recent increase in the number of prosecutors in the War Crimes Department of the SPRK is a step in the right direction; however, more resources are needed to pursue both war crimes, high level corruption cases and other forms of serious crime.

A recruitment of new prosecutors is currently ongoing and we all hope that this process will identify a committed and diverse group of prosecutors. It goes without saying that in a rule of law society, recruitment processes should only be based on merits; and talented candidates should not be discouraged to apply because they lack âthe right connectionsâ, or they because they can make more money working in private practice.

Having a pool of well trained, confident and experienced prosecutors is a real asset to any society. Without a strong and independent prosecution rule of law will always suffer.

Determined and professional police investigators, who are working hand in hand with the prosecution, as well as judges, who are truly independent of any outside influence, are equally important.  But without committed and determined prosecutors with high integrity justice will never prevail.

Thank you for your attention. 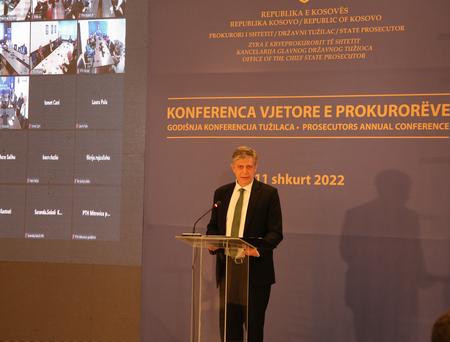 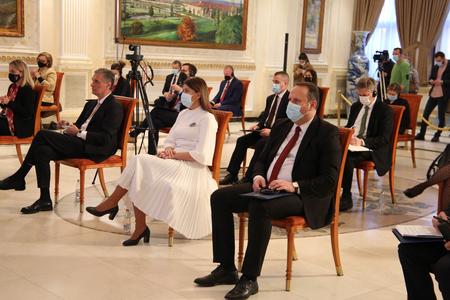