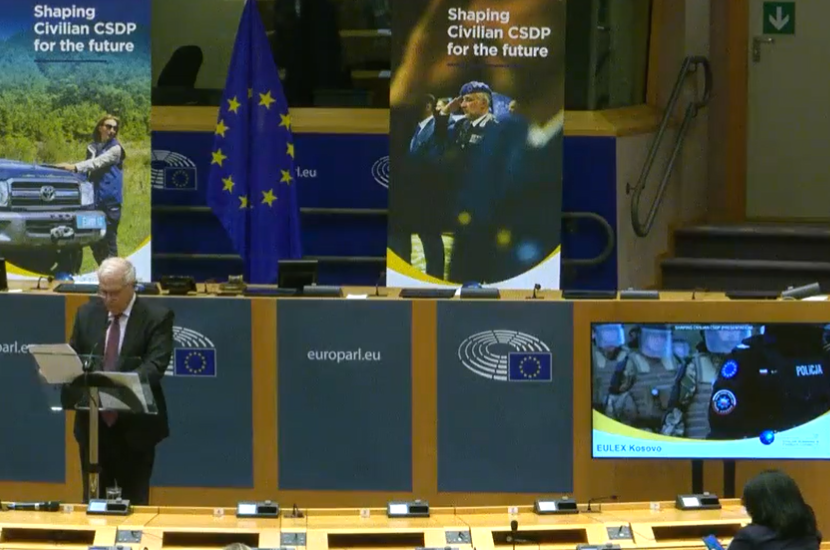 I am happy to be with you to mark the 15th anniversary of the Civilian Planning and Conduct Capability. This is a good opportunity to turn the spotlight on the civilian dimension of CSDP. I want to thank the Civilian Operations Commander and CPCC Director for organising this event.

Todayâs conference has taken stock of how civilian CSDP contributes to the security of our partners - in our neighbourhood and beyond. And by extension to our own security.

Today the focus is on a single pressing objective: to âshape civilian CSDP for the futureâ. We do so in line with the goals set out in the Strategic Compass, which is our guiding document for the future security and defence of Europe.

The conference has heard from many of the personalities who have driven civilian CSDP forward in the last 15 years, including former Civilian Operations Commanders. We will honour their contribution shortly.

Since 2007, the CPCC, the Headquarters for our civilian missions, helped civilian CSDP to become a potent EU instrument to address crisis situations around the world.

We have much to be proud of. Overall, we have deployed 23 civilian missions around the world, since our first mission in 2003.

We currently have 11 missions working on three continents. Each one is making a valuable contribution to the EU âintegrated approachâ and our reputation as a global security actor. Around 2000 women and men working side by side with their host-state counterparts.

What they offer is a unique form of assistance. Our partners turn to us for advice and expertise on a broad range of domestic and international rule of law challenges. And this demand will surely increase in our more volatile, contested world.

The added-value of our missions stems from one main ingredient: the quality of the seconded personnel provided by our Member States who bring their specific expertise and also fly the flag for European values.

We salute their dedication. Their tasks are varied and often carried out in difficult conditions. But they all serve the same strategic objective: a safer world.

Today, I want to focus on a few of our more emblematic missions both past and present. To illustrate the range of our actions and our ability to achieve results. But also the need to prepare for the future challenges to come. So do sit back and relax, while I take you on a historical and geographical tour.

EUCAP Somalia: civ-mil capabilities working together in the same theatre for maximum effect

In early 2000, we were confronted with an outbreak of piracy in the Horn of Africa. This was threatening shipping lanes vital to European economic interests. Our CSDP response was targeted, sequential and comprehensive.

First, a naval operation was deployed off the Somali coast. And then two missions - one military and one civilian - were deployed in Somalia itself. Their combined purpose was to reinforce the capabilities and resilience of the Somali authorities. To help them combat not only pirates operating off-shore but also to improve the internal security situation on-shore.

EUCAP Somalia gave the maritime authorities the necessary skills and equipment to conduct a basic coast guard function. Away from the coast, it also helped train some 700 federal Darwish, a robust police force mandated to secure territories freed from Al Shabbah control.

Today, Somalia still faces massive internal security challenges. But thanks to our CSDP efforts, piracy is no longer a major threat to international shipping off the Horn of Africa. This is a success story and we should not be shy to claim it.

Unfortunately, not all our efforts have been crowned with similar success. EUPOL AFGHANISTAN was deployed in 2007 to support the creation of an effective Afghan police force.

Despite some initial success, the mission ultimately had to be discontinued. And sadly not without the tragic loss of some our serving personnel whose ultimate sacrifice we have just honoured this afternoon.

Our ambitions for an inclusive Afghan police force with an equal role to women remains unrealised. And recent events in Afghanistan make this goal even more a distant prospect.

The lesson here is that we can only succeed if we have the necessary buy-in from our host-state partners. No amount of external assistance can ever substitute for a legitimate political settlement, agreed by local forces.

Were we therefore wrong to try to help the Afghans establish a modern police force? Or do we accept that, in a complex world, sometimes our missions may not be able to deliver the results we hope for?

Inevitably CSDP action comes with risks. Not only physical risks to our staff but also the political risks of an unfulfilled mandate. We always try to mitigate risks, with careful planning. But zero risk does not exist and we must be mature enough to acknowledge it. And often, the risk of inaction is greater in the longer term.

EUMM Georgia: the political will to act

The Strategic Compass has set a target for civilian CSDP to be able to deploy a mission of 200 personnel within 30 days, in a complex environment. This is a tall order, but we have already proven what we can do with our Monitoring Mission in Georgia, if there is enough political will.

The Mission in Georgia was deployed and operating within 6 weeks from the decision to establish it: from maps on the wall to boots on the ground in under two months. EUMM Georgia allowed the temporary and fragile cessation of hostilities between Georgia and Russia to move into a situation where the risks of open conflict have been strongly mitigated.

To this day, EUMM Georgia conducts daily patrols along the Administrative Boundary Line, defusing tension and de-escalating incidents. Its presence helps to build confidence between the parties and acts as an international factor of stability in this potentially highly volatile environment.

In some respects, it provided a blueprint for engaging our partners across the entire rule of law spectrum.

EULEX Kosovo was initially deployed with some 3000 personnel, to provide comprehensive security assistance to the Kosovo authorities and help them establish and entrench the rule of law.

This was a massive undertaking, requiring unprecedented mobilisation, both at headquarters and by our Member States. The raw figures are impressive. At its height in 2011, EULEX deployed 1000 police officers, 200 border customs and immigration officers, 120 judges, prosecutors and legal reform advisors and 60 prison experts.

Ten years later, the mission has largely delivered on its mandate and as a result Kosovo is able to continue its journey towards further European integration.

Russiaâs aggression against Ukraine shows how vulnerable our neighbourhood has become. After the start of the war, our rule of law mission EUAM Ukraine was forced to evacuate its international staff from its headquarters in Kyiv and its regional offices in Kharkiv and Mariupol.

Once people had reached safety, they went straight back to work and adapted activities to meet current needs: assisting Ukraine to manage the unprecedented migration flows out of the country and to investigate and prosecute war crimes.

I am pleased that last week the mission returned to Kyiv. We need to see how the mission can best help our Ukrainian partners in the future. Military operations aside, Ukraine has many security priorities and needs - and we must adapt our offer to meet these expectations.

This brings me to my final point: our missions must be able to adapt to fast-changing operating environments. Flexibility and adaptability need to be baked into our CSDP culture and in our planning. The world around us is spinning ever faster and we must keep up.

So, where do we go from here? The Strategic Compass calls for a more effective, flexible and responsive CSDP. There are many ideas for developing and improving civilian CSDP that you discussed today and that we can include in the next Civilian Compact.

Here I want to make one specific point and that is the importance of making sure that our ambitions in civilian CSDP are properly resourced. This means getting the right number of seconded staff with the required skill sets.

So my message to Member States is that we need more personnel contributions in the future, with the right set of skills and experiences, to ensure that civilian CSDP can deliver on its promise. The human factor is in the end what makes the difference in civilian CSDP.

Let me finish by thanking all CPCC staff working in field and at Headquarters. What you do for the security of Europe and the security of our partners is truly appreciated. And it makes a real difference to our position in the world.

Link to the video: https://multimedia.europarl.europa.eu/en/webstreaming/high-level-conference-cpcc-hlc-shaping-civilian-csps-for-future_20220524-1600-COMMITTEE-SEDE