If I canât dance, I donât want to be a part of a Revolution â Igballe Igo Rogova 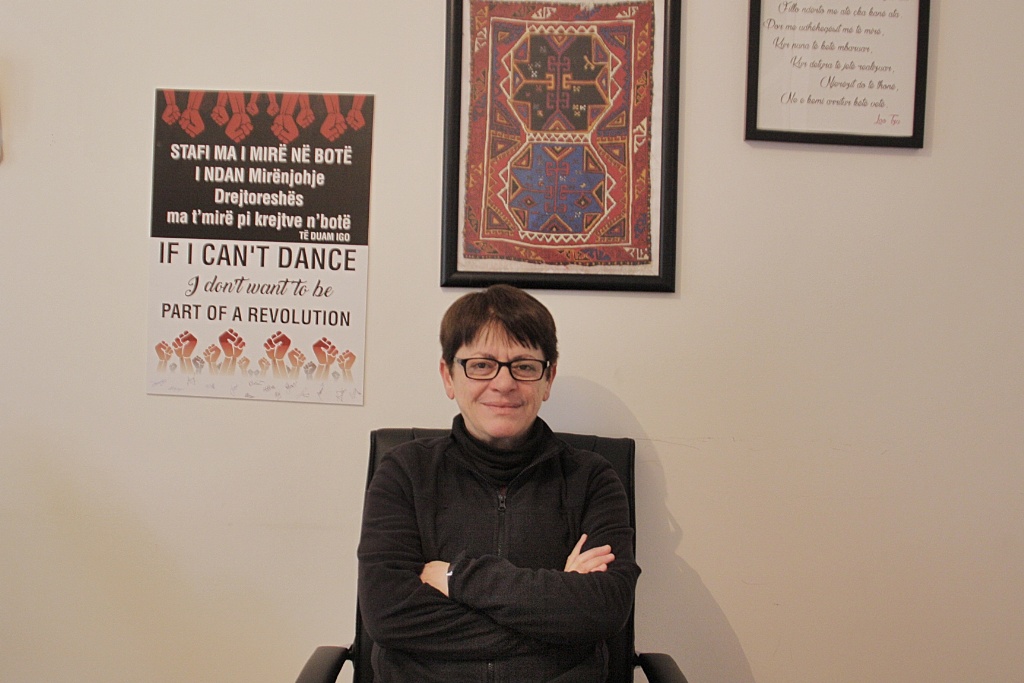 If eyes could tell a story, hers would â in fact hundreds of stories. Igballe Rogova, known as Igo, gives you that impression during the first moments you meet. Her tale of resilient human rights activism is about three decades long.

She has been an activist ever since she can remember. Growing up in a household dominated by women with six sisters and a strong mother figureâ from an early age it was implanted in her mind that women can do whatever they set their minds to, just like men.

But the real life had given Igo another message.

âWhat I realised later, is that women have to fight tremendously harder to get where they want, even if itâs something as humble and basic as learning how to read and writeâ, she points out.

So the beginning of her activism in Kosovo meant she had to fight for a meaningful cause involving women â leading her to tackle illiteracy amongst the Kosovo Albanian women community.

âThere were women in Pristina neighborhoods who were actually illiterateâ, says Igo. âI couldnât imagine that a woman could be deprived of such a basic right â to learn how to read and write. To me that was unacceptableâ.

Together with her sister, Igo established the association âMotrat Qiriaziâ set to disperse the deeply rooted patriarchal mindset that deprived some women of their liberty and right to education.

âWe started by teaching that group of women to read and write and it was one of the first accomplishments that made me realise what a true difference we can make in oneâs lifeâ, continues Igo. Illustrating her point with a beautiful faded photograph from the late 80âs of the group of women who were taught by herself and her sister Safete Rogova.

âEven though during those years we faced oppression, it was a time that I nostalgically recall, because it was a time of solidarity. It didnât matter if you were a woman or a man, everyone showed solidarity towards each other. That is what actually being an activist entails â serving your citizens and your community.â

Today, Igo Rogova is the Executive Director of the Kosovo Womenâs Network. Itâs a network that advocates on behalf of women at the local, regional and international level; while representing the interests of its 126 members, including womenâs organizations of all ethnic groups from throughout Kosovo. She proudly talks about the commitment that her team shares and the values and passion in their work in such challenging environments.

KWN is widely known for its significant role in influencing important legislation, despite the fact, as Ms Rogova points out, the difficulties that they face because of the inactive government leadership in this area of concern. The network has aided the development of mechanism to implement the legislation that addresses domestic violence, sexual and gender based violence.

It all started in 2004, when KWN raised the voice on domestic violence through a massive protest faced with the silence and denial of the then government. Since them, KWN has decided to stick to the facts in order to raise awareness and spur the authorities into action. Every claim is based on extensive research, Igo points out.

Many believe that this is the main strength behind the organisation. In fact, KWNâs first research project âSafety begins at homeâ materialized into the law on domestic violence, followed up by the action plan and later on with two strategies. Of course, the whole project was conducted in cooperation with the Assembly of Kosovo.

According to Igo, the main problem of such legislation is that it in most cases it remains on paper, as there is hardly any implementation on the ground. This coupled with patriarchal norms still active in the society is a major setback for womenâs rights in Kosovo. She would like to see the government lead by example by letting women have equal treatments in all levels of society, especially in prosecution of sexual and gender based violence cases.

That is why her organization works intensively to be the voice of the citizens, so their ideas and concerns can be heard, encouraging active citizenship. âThe ideas and concern should come from citizens, they shouldnât be imposed by the government or donorsâ, highlights Igo. Further, as a strong advocate of women empowerment, KWN has published a compilation of stories to portray the level of the implementation of UNSC Resolution 1325 on Women, Peace and Security in Kosovo.

This extensive research is the reason why she was invited to be a member of the Group of High Level Advising Experts for the Global Studies, regarding the fifteen year implementation of the UNSC Resolution 1325, in a working group that was consisted of fifteen women activists from around the world. It was intensive work that materialized in a report with recommendations taken on board by UN Women on a global level.

Being a woman activist today is as precarious and challenging as it was thirty years ago, when Igo Rogova began this long journey. During the 90âs such activism was punished with a jail sentence by the Milosevic regime, recalls Igo while telling stories how she and her fellow activists during that oppressive time inaugurated eleven libraries in Kosovan villages and delivered medicine in remote areas where health care was inaccessible to people.

Unfortunately women activists, including Igo, continue to face the threats even today. There were times in the recent past when she was threatened with her life just for what she stood for. There were times when she was even forced to flee her home just to be safe. She overcame it all by continuing to be firm, passionate, stoic and faithful to her beliefs and her legacy.

How did she overcome the difficulties that inevitably came with the job? âDancing and music. Music is the answer, a healer of the soulâ, Igo happily points out. âIf I canât dance, then I donât want to be a part of a Revolution.â To illustrate this, we took a trip down the memory lane, 1999 specifically.  During the Kosovo exodus, Igo took on a very challenging initiative in one of the refugee camps in Cegrane, FYROM. Faced with hundreds of women who were forced out of their homes and lost their loved ones, she knew that there was something she had to do.

She got two tambourines and gathered hundreds of women in a tent at the camp. âOne tambourine is for me and the other is for anyone of you who wants to play. Letâs deal with our enormous pain through music. Letâs let it out through musicâ, cried out Igo to the women. Once she started, she encouraged each and every woman there to do the same thing: cry and sing the pain away. âThere were women who were rape victims and that is where they spoke for the first time. They expressed their pain through the music. It was incredibleâ, remembers Igo.

It doesnât end here. Today, Igo is a member of Civil Society Advisory Panel on Women, Peace and Security â NATO. It is a three year responsibility that she has taken over in representing the Southeast European region. It is where the action happens. What the 1325 Resolution cannot achieve in practice, this group addresses the issues directly to NATO with advices and recommendations. The publication by KWN on Facts and Fables on the UN SC Resolution 1325, was strongly taken into consideration by the NATO representatives in this Civil Society Advisory Panel as one of the guides in addressing Women, Peace and Security matters.

With all this extraordinary baggage of history, where activism and music are a major part of her life, at home Igo loves to listen to the cellist duo â 2CELLOS, dance and unwind with a glass of wine. Sheâs recently celebrated fourteen years of love with her life partner. As a family person, sheâs very close to her sisters who have always been a rock in each otherâs lives.

Ending this lovely conversation with Igo Rogova, one cannot help but see in her the resemblance of the words of Maya Angelou, the famous civil rights activist: âEach time a woman stands up for herself without knowing it possible, without claiming it, she stands up for all womenâ.