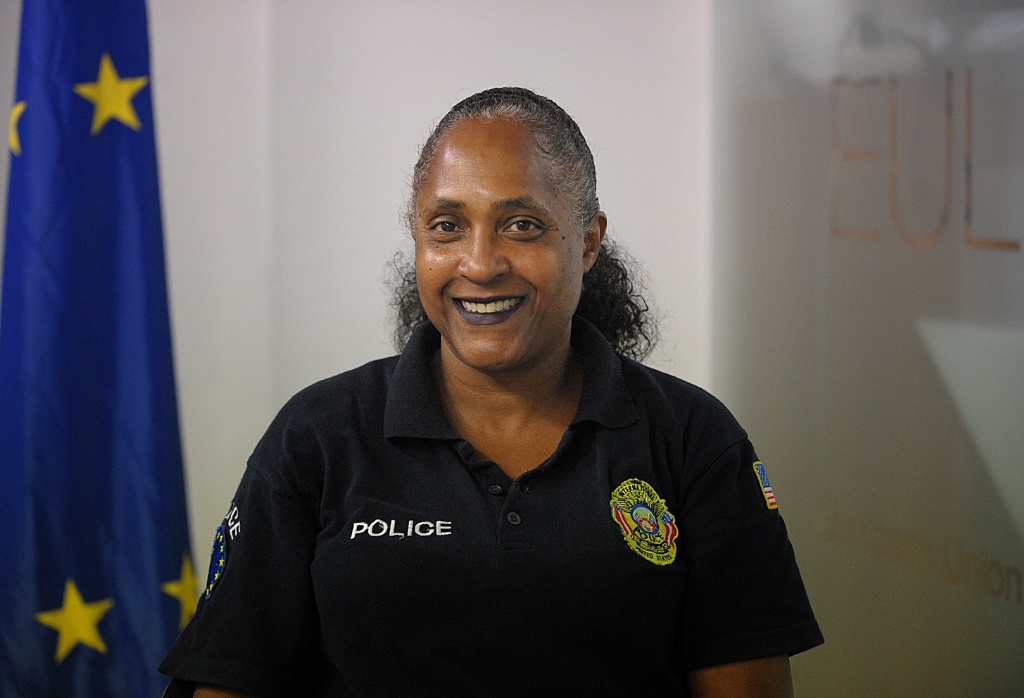 As she had done every day for the past twenty years, Detective Cindy Syes walked into her office at the City of Dallas, Texas Police Department. But this time, in February 2007, she was truly overwhelmed. Her colleagues greeted her with cheers, hugs, and a round of applause: Detective Syes was celebrating her retirement from police service. However, little did she know that soon she would be embracing a whole new career full of possibilities and adventures.

Following retirement from detective service, Cindy briefly brought her investigative skills to the City of Norfolk, Virginia School District as the Senior Coordinator, charged with investigating allegations brought on teachers and students. Due to a family emergency this was short lived, but in January 2009, she would embark to on the first of a total of three tours in Afghanistan as an Advisor to the Family Protection Units mentoring the female investigators assigned to family violence cases. Throughout her tours in Afghanistan, she was assigned to the Womenâs Police Academy and was a senior advisor for the top female general, BRG GEN Sharifa. She would later return again in 2013 until 2014 where she was assigned as Senior Gender Advisor to the Afghanistan Corrections Director of Human Rights and Gender Department. Detective Syes also worked for the State Department as a Senior Human Rights and Gender Issues Advisor in Iraq from 2011 to 2013.

Having been around the world, the culmination of her various career positions has made Detective Syes a perfect candidate to work at EULEX as a Sexual and Gender-Based Violence Advisor to Kosovo Police. Using her years of experience in various locations, her task is to organize workshops not only to teach Kosovo Police and the Prosecutorâs Office how to use forensics identifies in reports, but also enable them to better support the victims. âI want to improve communication and language used to serve victims and work with local counterparts to develop more comprehensive support plan. We need to protect and support victims.â, she stresses.  Cindyâs goal is to promote public awareness for women victims by providing information about points of contacts and how the police can improve their service in this area.

Cindy Syes has worked at EULEX since March 2017. In this capacity, she advises Kosovo Police on gender-based investigations by speaking with all required individuals, institutions, and NGOs to support victims after a crime occurs, and to protect members of society that are at risk. Syes says, âI visit shelters, write reports, and make recommendations to support Kosovo Police and ensure they follow and complement EULEXâs gender focus.â She continues, âI also work with local NGOs to support shelters for women where they can temporarily go to remove themselves from situations of domestic violence.â

Many of her responsibilities at EULEX are similar to her former life as a police officer and working with the local community. She wears many hats and coordinates with Kosovo Police to ensure they are following mandate strategy for the LGBT community, amongst other things.  âMy passion runs deep for administering justice regarding sexual, gender and family violence.  We have a long way to go in the world in combating these issues.  A lot is written on paper, but to execute this is a whole other animal.  We must continue to address the violence and stand up for those who cannot speakâ, she point out.   âAs with anywhere I have been, if I can help the Kosovo policeâs skills regarding investigations, arrests and prosecution of these crimes, then I have accomplished somethingâ, she says.

It becomes clear looking at Detective Syesâ upbringing how this former Dallas Detective arrived at EULEX. Her father was a career US Marine and her mother worked as an assistant professor at Texas A&M-Commerce University, Dallas campus. Cindy says, âMy parents played a vital role throughout my life, teaching me to be honest and straightforward and not to dwell on the negative.  Parts of the job are difficult, but remembering my parentsâ advice motivates me to help others.â

After graduating from Battery Creek High School in Beaufort South Carolina, she attended Tennessee State University, graduating in 1985. Sitting strong and confident, Syes discusses being an athlete her entire life and how incorporating the discipline this taught her provided her life with stability, particularly learning from her high school and from former Olympic track coach, Edward Temple. Maintaining and promoting a healthy lifestyle has always been fundamental to her.  After graduating from TSU, Cindy transitioned into her career as a police officer in Dallas, Texas. âIt all started as a dare. A good friend suggested I couldnât make it on the police force because I was a girl. I was determined to prove them wrong,â says Syes. âTraining back then was tough and women were expected to do everything the men did with no excuses. âIâm proud of graduating from the Dallas Academy,â she says.

Her first assignment led her to police patrolling  in Dallas.  This transitioned into community policing, working in the Dallas lower income housing neighborhoods. Part of her role was working with families through many types of community-oriented activities, as well as fighting crime.  âMany families who lived in the area, their voices were not heard and the group of police officers whom I worked with enjoyed being that voice for them.  I am proud of the work we did and my colleagues continue to do in the community policing area.â

She was destined for success after being in the right place at the right time, as well as making several important arrests during her career. One such arrest included busting a gang of armed robbers who had been hitting the banks for months. âAfter one particular heist the group made, the vehicle driven by the ring leader passed in front of me, after a small car chase, with the help of colleagues and SWAT, everyone was apprehended without incident.â

Six months since her arrival at EULEX, Cindy says she has really enjoyed Pristina so far. She loves the summer breeze, the wine, and the Kosovo people. âEveryone is incredibly friendly and supportive. Kosovo has a lot to offer its citizens and tremendous potential.â The job takes her all over Kosovo visiting every region throughout.  âI love all of the places I visit, and the food is amasing here.  I had the privilege of assisting with the charity bike ride for women and children riding in a van (no, not biking!) that my supervisor Mark Dixon organizes every year. The mountains and other areas we traveled through were breathtaking.  I have to give kudos to the bike riders, those mountains were steep, but it was for a worthy cause.â

Being the child of a former Marine, her parents instilled the sentiment in their daughters to always enjoy life, meet new people and travel.  âWe went on vacations every year and living in different cities introduced me to so many wonderful people from around the world.  This helped shape my views and values in respect of different cultures.â

Living abroad has allowed Cindy to experience so many different places, people and cultures that some only read and dream about.  Firsthand knowledge, information and experience are key for Cindy: she mentions that books can only get you so far. For example, working overseas in Afghanistan, she lived onsite in the camp and the only movements she made were from camp to work.  However, when stationed in Bamiyan, Afghanistan, she lived next to the ruins of ancient Bamiyan, where the Buddha statues were destroyed during the war. She traveled to the Red Castle and the sacred Band-e Amir Lake.  Her travels have taken her even further to Iraq, Africa and Amman in Jordan, where she was able to visit the River Jordan and Petra.

Of course, when living abroad, she misses home. Being away from family and friends can sometimes be hard, however with Skype, Facebook and other forms of communication Cindy finds it less difficult. âKeeping in touch with those closest to you is always important, and I make a point of talking with family every day. When I am home I spend time with my mom, youngest son and friends. I go to Nashville Tennessee often to visit my oldest son and his family. I enjoy spending time with my two granddaughters and catching up with my friends and sorority sisters of Delta Sigma Theta.  In my spare time, I love to read, run, exercise and hang out.â

Cindy hopes to continue working as an advisor for a few more years anywhere in the world, then go home and enjoy the rest of her life with family and friends.  âI know I am blessed and I will continue to never take each day for granted.  When I help someone in any shape or form, I always like to tell them to pass that help onto another, because you never know positive an impact you can have on someone when you help them.â