Regional Police Conference to be Held in Pristina 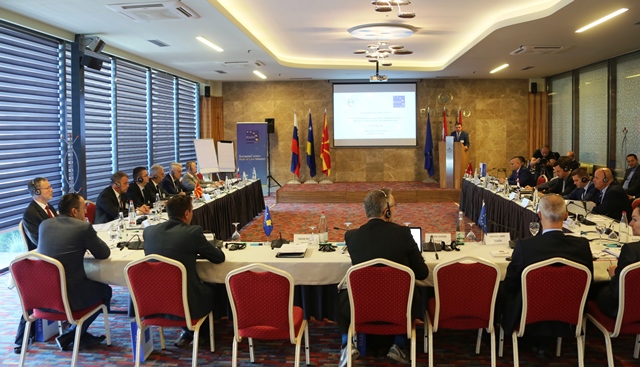 Representatives of, Albanian, Croatian, the Former Yugoslavian Republic of Macedonia, Slovenian and Kosovo Police are to participate in a two day Regional Police Chiefs Conference that commences in Pristina today 17th May 2018.

The Conference hosted by Acting General Director of Kosovo Police Naim Rexha of Kosovo Police, and facilitated by the EULEX Mission, is being organised to further promote regional cooperation following the successful Police Chiefs Conference that was held in Skopje (9th and 10th September 2016). The aim of the conference is to gather together the senior police representatives from the region to consider the strategic threats and risks, posed by transnational organised crime and terrorism and how this can influence regional peace and stability. In addition the conference seeks to highlight the opportunities and benefits that enhancing regional cooperation offers.

The  General Directors from, Slovenian, Croatian,  the Former Yugoslavian Republic of Macedonian, Albanian and Kosovo Police accompanied by their respective Directors of Investigations, will participate in the Conference.

Acting General Direct Rexha said of the conference, âI am very proud to been able to host this important event here in Pristina. I hope the conference results in some practical conclusions in the future, which will enable us to work in closer cooperation with our regional partners for the safety of all our citizens.â

International Terrorism and Organized Crime are two of the major global threats that affect all the regions of the world and by their very nature do not stop at borders. Recent terrorist attacks in Europe, which caused high numbers of causalities and material damage, are clear indicators that this phenomenon needs to be addressed globally with cross boundary/border cooperation being vital. This conference seeks to further increase and strengthen the cooperation of the Regionâs police agencies when attempting to prevent such atrocities both at home and further afield.

At the Conference, all regional Police Directors agreed to intensify the exchange of information and to identify all possible means to expedient effective information sharing. In addition, the Directors pledged to continue organising regional conferences on a regular basis in order to promote further the mutual assistance and collaboration in information sharing and gathering.

The European Union Rule of Law Mission in Kosovo (EULEX) strongly supports the police agencies in the region in their approach to foster, further develop and enhance their collaboration for the safety and prosperity of their citizens.

âEULEX Mission would strongly encourage that conferences such as this happen on a regular basis. We all know transnational threats such as organised crime and international terrorism has no border/boundary restrictions. Strong regional collaboration amongst all regional agencies including those invited that are not in attendance at this conference is a vital part of preventing criminality in all its forms and is instrumental in bringing the perpetrators to justiceâ, said Martin Cunningham Head of Strengthening Division EULEX.

A press conference will be held at the conclusion the conference at approx 1200hrs 18 /05/2018 at the Emerald Hotel.