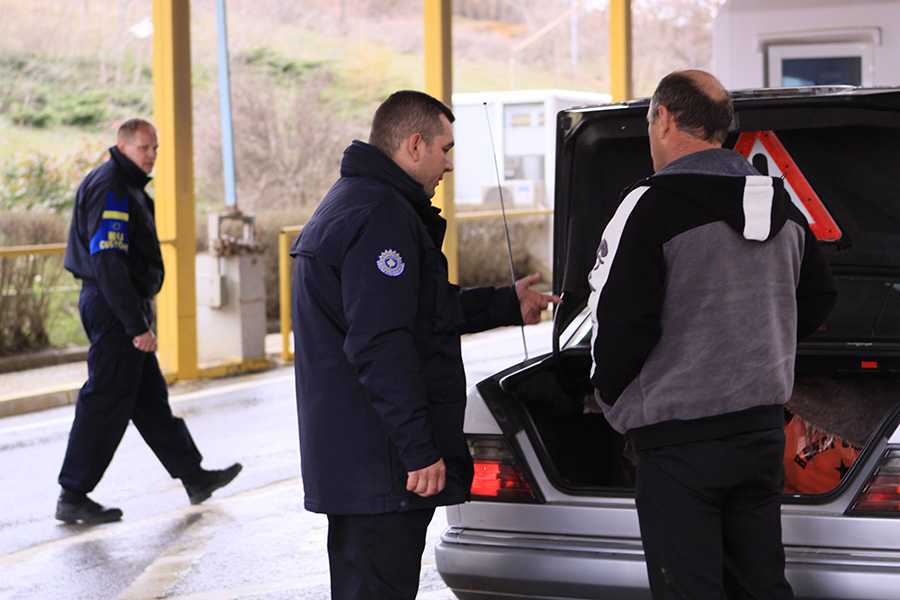 Thousands of residents of Germany, Switzerland, and other Western European countries return to Kosovo every summer to visit family and friends. During the summer, Pristina Airport is teeming with visitors who enter Kosovo without major problems. This situation stands in stark contrast to what is encountered by those who choose to come by car. In the summer of 2009, the waiting time at Merdare/Merdarë crossing point was up to 24 hours. This meant hours in the blazing Kosovo summer sun, hours in the chilliness of Kosovo summer nights, sometimes hours without food or water.  Truck drivers might be used to these circumstances, but families travelling with children were not. This situation posed an enormous challenge after having been on the road for hundreds of kilometres.

“We would see long lines of cars day and night”, recall EULEX staffers who were on duty at the crossing points, “Before the establishment of the integrated crossing points even robberies could happen in the no-man’s-land between checkpoints. People were on their own for hours, with no officials close by.”

EULEX has been present at the crossing points since the beginning, supporting Kosovo Border Police (KBP) and Kosovo Customs (KC) as part of EULEX’s Monitoring, Mentoring and Advising (MMA) mandate. Part of this assistance was working with Kosovo authorities to identify ways to improve traffic flow at the crossing points. For instance, EULEX advisors gave advice on how to re-design the layout of the crossing points so that vehicles could get checked more quickly and efficiently by KBP and KC.

The road to normalisation

Since the implementation of the IBM agreement started, these efforts have received a major push forward. As part of the Dialogue between Pristina and Belgrade, in 2012, both parties signed off to create six official co-located crossing points– meaning both sides share common infrastructure at the same geographic location.

In December 2012, the first four interim IBM crossing points became operational. Two of them were located in northern Kosovo, where the weather had been severe and access to bring in the necessary equipment to build the integrated crossing points was extremely difficult. In order to ensure that the IBM agreement would be implemented, EULEX chipped in and constructed one crossing point in the middle of a snowstorm.

Despite these adverse circumstances, all crossing points were opened on schedule – the last two were opened at the end of February 2013. EULEX would not allow the IBM agreement to collapse under the snow!

The results are striking. Through more proximity and daily cooperation, procedures have been improved and the flow and clearance of traffic through the crossing points became much faster.  Every day, EULEX facilitated talks between officials on both sides of the crossing points, so that they could agree on which specific measures to implement in order to ease traffic control and reduce waiting times in busy periods. This cooperation drastically shortened the queues during the summer period.

The IBM agreement also regulates another important area – customs, which is still the main source of income for Kosovo. Since December 2013 customs revenue is also being collected at the northern crossing points. Over four million Euros have been collected from goods destined for the northern Kosovo. These revenues go directly into a fund that supports the development of northern Kosovo. Both the opening of the crossing points and the start of revenue collection are direct results of the combined efforts of EULEX and the Dialogue parties in the implementation of the Dialogue agreements.

Finally, the IBM agreement established new communication lines between the two parties, fostering exchange of information, including electronic data in the area of customs. Together with the work EULEX has undertaken with Kosovo Customs to do better quality risk analysis and targeting, this has contributed substantially to reducing smuggling and tax evasion on both sides.

Back at the crossing point in Merdare/Merdarë, both sides are preparing for heavy traffic over New Year. This year, EULEX will not be continuously present. With the Mission´s recent reconfiguration, and taking into account the successful application of standards by KBP and KC and also progress in the implementation of the IBM agreement, the EULEX presence was reduced to regular visits to all the crossing points between Merdare/Merdarë and Depce/Muçibabë. However, EULEX staffers will continue to facilitate the cooperation between both parties and are confident that things will go smoothly: “Both sides are talking to each other, exchanging information and providing support to make the traffic flow move as quickly as possible. It’s in the interest of everyone.”