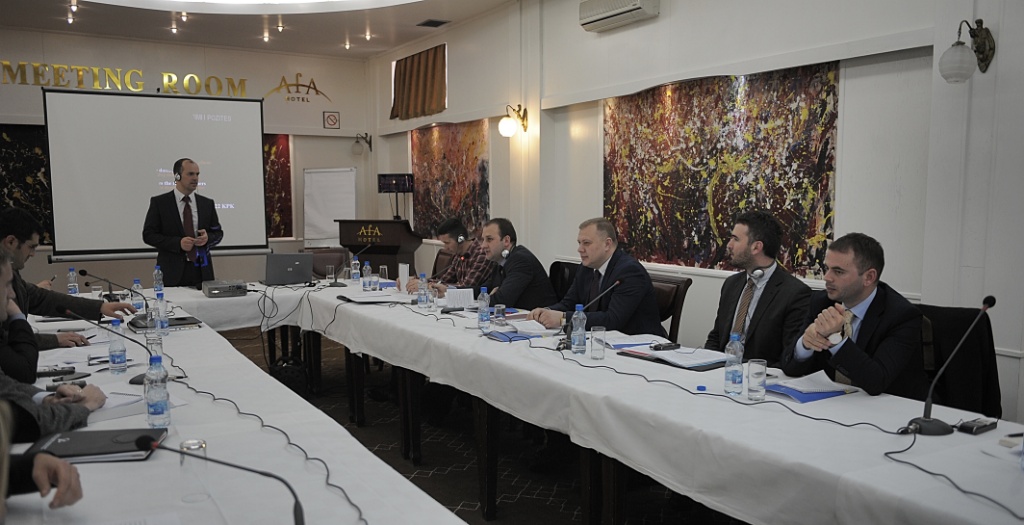 Most criminal offences require what lawyers refer to as "mens rea", which is simply Latin for a "guilty mind" or intent to commit the crime.

Often the biggest difficulty in cases of alleged corruption is proving not only illegal conduct, but also criminal intent.

As part of the newly introduced EULEX project cell which aim is to complement, contribute and support the monitoring, mentoring and advising mandate of EULEX and to ensure sustainability of missions' activities, the EULEX Anti-Corruption Team organized one day specialized training under the subject "Proving criminal intent in corruption cases".

The training was held on 25 February 2015, in which fifteen investigators of the Department for Combating Corruption of the Kosovo Anti-Corruption Agency took part.

The Agency plays a key role in Kosovo's anti-corruption chain: bedsides its role in preventing corruption and supervising policy instruments in the fight against corruption, its task is to conduct preliminary investigation in cases of suspicion of corruption.

The aim of the training was to strengthen capacities of the Agency's staff in conducting effective preliminary investigations as well as preparing substantiated investigation reports for the prosecution offices. After having thoroughly analysed the shortcomings in the preliminary investigation reports submitted by the Agency to the prosecution offices, EULEX designed training focused on how to prove criminal intent in corruption cases.

"The idea of this training derives from EULEX and is a very good idea which we welcomed because some shortcomings were identified in our reports that we submit to the prosecution. In addition we agreed to discuss with prosecutors to see also their perspective on how they see our arguments to prove the cases related to corruption, "explains Blerim Kelmendi, Director of the Agency's Department for Combating Corruption.

The training was delivered by EULEX Prosecutor Cezary Michalczuk who was impressed by the dedication of the investigators, "I was really delighted by the active participation of the ACA officials and the level of substantive discussion we had during the training. The issue of criminal intent is of crucial relevance in corruption-related investigations and the Agency has got tools and potential to be able to elucidate this element in their reports submitted to the prosecution. This task is not particularly easy but must be always completed if we truly want to succeed in our fight against corruption in Kosovo."

The Director of the Agency's Department for Combating Corruption, emphasized the importance of the training, "this is the first time we're having such training. It is going very well and it is serving the purpose to expand our knowledge regarding the cases which need to be brought to the prosecution."

EULEX Anti-Corruption Team will follow-up on the results and impact of the training in order to design similar workshops during the coming months.