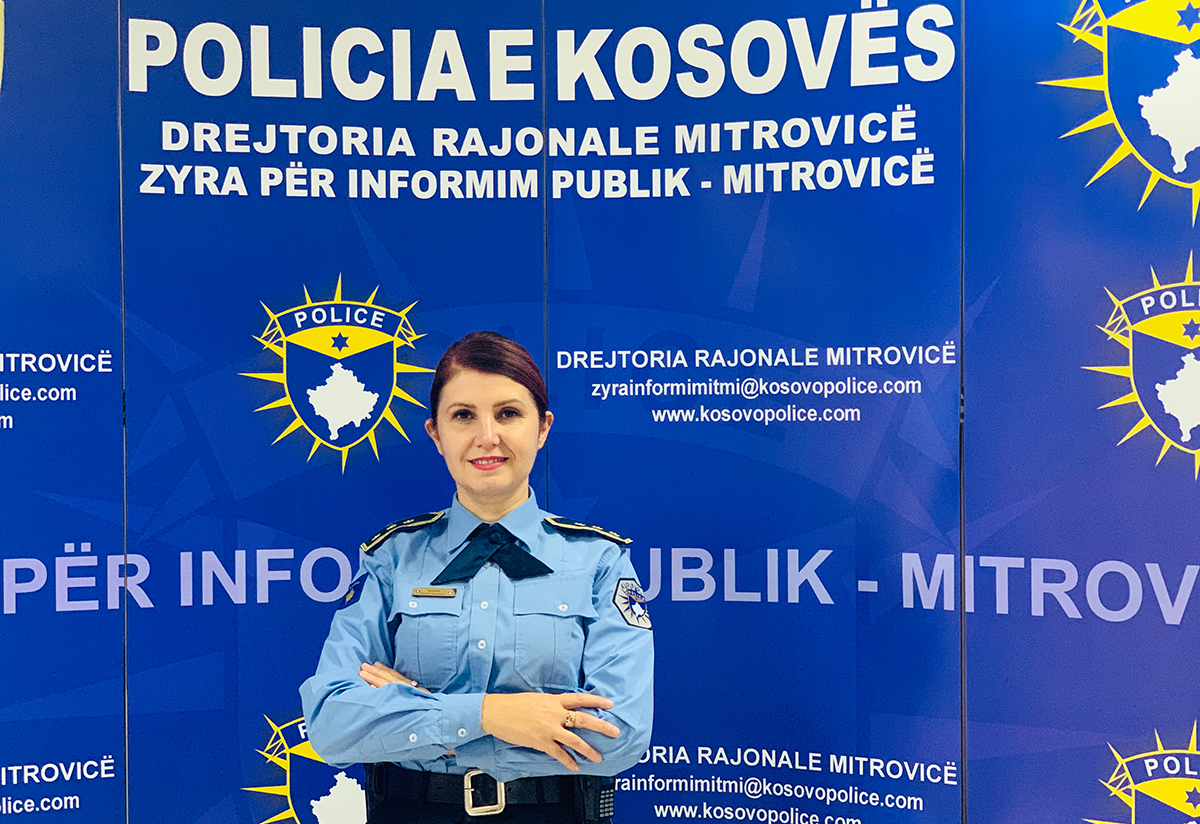 âRemember why you started,â reads the quote hanging on a wall in the South Mitrovica police station. Whenever Aferdita looks at this simple, yet meaningful adage, she is reminded of her first steps in the Kosovo Police School and her never-ending commitment to the service. As the Director of the Regional Directorate of the Mitrovica South Police region, with more than 500 employees under her command, she often thinks back on the day when she wore her police uniform for the very first time.

âI belong to class one,â she proudly explains. âI joined the Kosovo Police in 1999, I belong to the first generation of women police officers in Kosovo.â After more than twenty years, the experience of being one of the first women in uniform still lives in her mind vividly.

Born and raised in Mitrovica, Aferdita clearly remembers her first weeks in the Kosovo Police. She recalls the difficulties she and her colleagues faced and the gratitude they received from the ones in need. âWe started from zero, people lacked ID cards and there was no database. Despite all the problems, we were highly respected by the public,â she explains.

Aferdita, a true pioneer in the Kosovo Police, talks about her impressive career path with modesty. Not only she was one of the first women in uniform, but she also became the first female instructor in Management and Leadership Division, and Head of the Basic Training Division at the Kosovo Police Academy in Vushtrri/VuÄitrn. âIf you work with full dedication, you will be acknowledged,â says Aferdita, convinced that this is the key to her success. âYou also have to love your job, like I do,â she adds.

Aferdita stresses that she never felt tired, because she was highly motivated. âEven in the most challenging times, when my team worked for more than 17 hours a day, I never lost my drive. The people I encountered and the personal stories I heard motivated me at all times to keep going,â said Aferdita.

She also speaks highly of her team, her extended family, as she calls it. âThough our daily work, we became part of each otherâs life; we are a true family,â she notes. Aferdita is grateful that she can truly rely on her team: âDue to the fact that the working environment requires from us to always be alert, we feel close to each other,â she says.

Aferdita also enjoys sharing her experience with the new generations of police officers, as well as with the members of the Association of Women in the Kosovo Police (AWKP), a UN Women initiative which aims at strengthening the role of women in the police and promoting gender equality. Not surprisingly, Aferdita is one of the founders of AWKP. She is convinced that sharing success stories with her female Kosovo Police colleagues is something of high importance.

Through workshops and training courses, AWKP members share their experience, exchange views on various issues related to their work, and discuss the challenges they face. âOur task is to enhance our fellow colleaguesâ roles and develop them professionally, to empower them and to raise awareness of the opportunities that exist,â stresses Aferdita, highlighting the importance of AWKP. âI tell them you can do it too! If I did it, they can do it for sure!â notes Aferdita, adding that the real mission of the AWKP is to be role models for women and girls all over Kosovo. Aferdita lives by this message every day and tries to encourage others to realize their full potential. What do you need for that? âCommitment. This is the key to our success,â she answers confidently. âWhen you have will, ambition and support from your team, you can achieve your goals.â

As her profession is full of challenges, one might ask what keeps her motivated on a daily basis. âThe respect and appreciation I get from my team, from my family, and most important from the communityâ¦ this is the greatest reward for me,â notes Aferdita. Just as the quote from her wall advises, Aferdita has never forgotten why she chose to be a police officer.