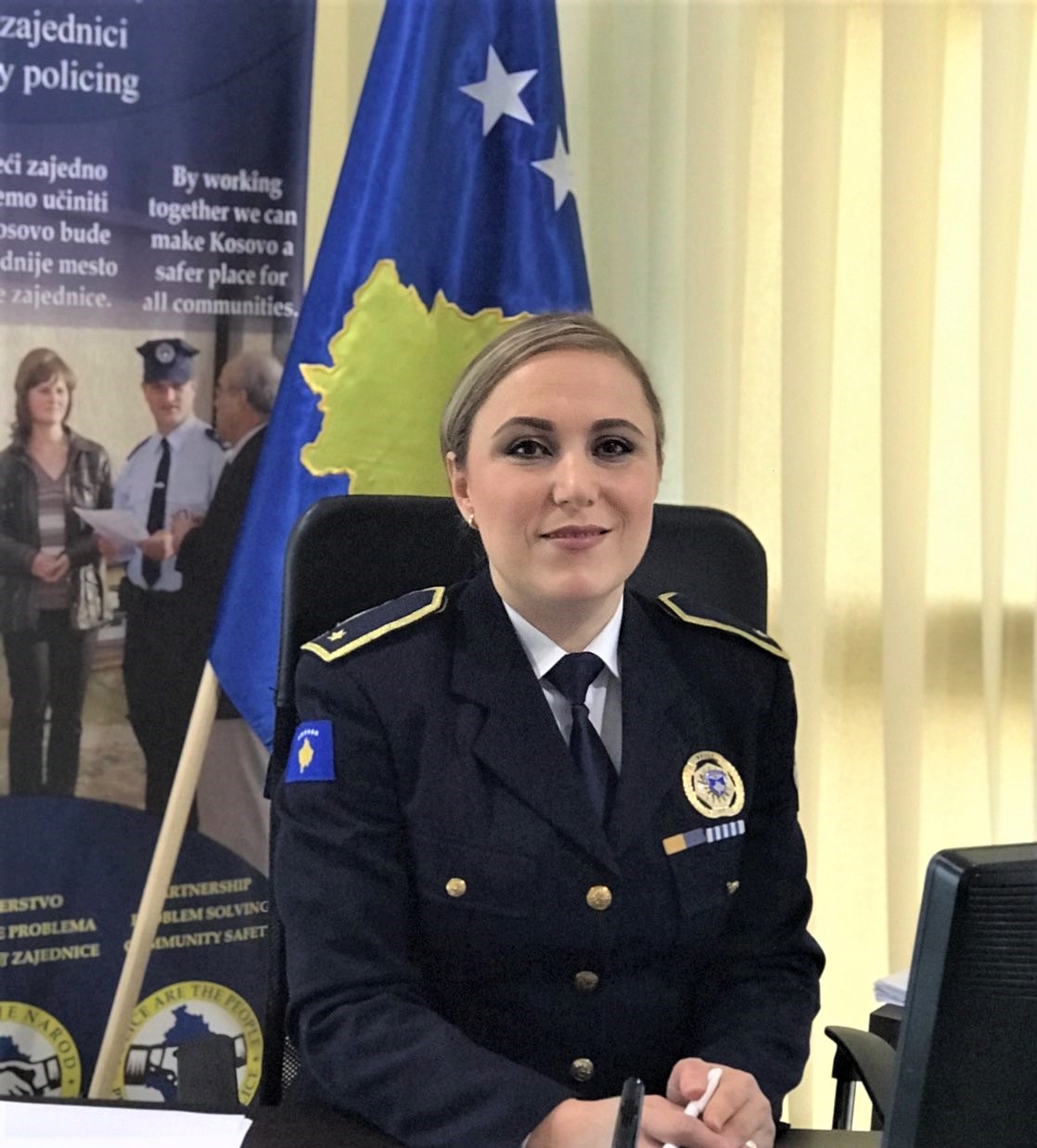 It is a unique challenge to be a commander of the Kosovo Police Station South, Regional Directorate of Pristina, and Vjollca Hoti, who holds this position for three years now, is up to the challenge. This station covers an important area of Pristina, and therefore deals with numerous security related requests by its citizens, and, since her role is operational, she is on duty 24/7, it is unforeseeable for Vjollca to always know when sheâll be able to go back home.

âOur police station has unique specifics and needs. The number of requests that we receive are very high due to the fact that we cover such an important area of Pristina, including the zone of University Clinical Center of Kosovo, therefore police activities in the field to prevent and fight crime, during all hours of day and night are numerous,â says Commander Hoti.

The cases in which she must be on the scene and lead are cases of a serious nature, such as cases where people's lives are at risk, or cases where explosives are involved, etc.  âWhen the level of danger and risk is higher than usual, I am there,â she explains.

In many cases, in order to shed light to what actually occurred, the cooperation of citizens and their trust for the Kosovo Police is essential: âI directly notice and feel the trust of our citizens in practice. This trust has been achieved through the cooperation and the professionalism that the Kosovo Police has shown in solving problems and creating a safe environment. Peopleâs awareness about security and safety in general is also high. Security is vital for all our lives.â

There are not many women who work in the leadership of the operational sector of the Kosovo Police. In fact, at the moment Vjollca Hoti is the only woman commander heading such a big police station in the operational sector of the force. One additional woman commander in a different field of the police, works at the Regional Traffic Unit of Gjilan/Gnjilane.

According to Commander Hoti, one of the main reasons why women hesitate to pursue this type of a career is the long hours and the nature of work itself: âThe level of risk is also one of the main reasons that halts women from pursuing a career in the police force. Nonetheless, I still think that in the future more women will take on big roles like mine. I encourage women to apply and aim for this type of career, because it is very rewarding. You see results of your hard work every day.â  Her face lightens up when she further talks about the ability and opportunity to protect people, enforce rule of law and achieve justice for people on daily basis: âHelping people deal with their problems, ultimately providing safety and security for them is just as important as being healthy. And in the world we live in today health and safety come in hand in hand, and I consider them equally vital for a normal and quality life. This is why I believe: that every woman who loves being a police officer and is ready to work 24/7 can embrace this type of a leading and challenging position.â

The police force is a career-oriented vocation. There are many ranks that one can be promoted to, starting from cadet up to the rank of colonel. But ranks are not the only option for career development. The police force offers also many other positions in operational, investigation and administration units. âBesides the development opportunities in the police force, I have to mention that the Kosovo Police has produced prominent figures of the Kosovo rule of law sector, such as the first woman President of Kosovo, Ms. Atifete Jahjagaâ, proudly states Commander Hoti.

There are currently 54 women in her team, which constitutes 27% of the police force in Pristina Station South. According to her, the aim is to have an equal representation of both men and women in the team, emphasizing that the women who are already a part of the team have done tremendous work for the Kosovo Police: âIn our team there are women who have worked in this station for more than 20 years now. For example, my colleague Sergeant Nekibe Bajraktari who has been a part of the Kosovo Police for more than 20 years now and is one of the people who have helped establish and develop our station. She is a role model for us all.â An important milestone for the women of the Kosovo Police was the establishment of the Association of Women in Kosovo Police, where Commander Vjollca is a vice president, with the aim of empowering the role of women in the Kosovo Police. This is meant to be achieved through training and career development opportunities, professional support and through advocating women-to-women support.

Vjollca is a mother of three children, with her youngest being only five years old. Her line of work many times presents a challenge when she cannot be home for many hours, and, to add on to the challenge, her husband also works for the Kosovo Police.  âThankfully, my mother has always been my saviour and the biggest support mechanism in taking care of my children during the most difficult times.â

Talking about her own safety while being out in the field and dealing with grave crimes Vjollca has mixed feelings about it: âOn one side, if I lose my life in the line of duty then my children will suffer, a mother is irreplaceable. On the other side, this is the also heroic and part of my job, and I was aware of the risks when I joined the police 22 years ago. In the end of the day, it is the love and passion for my job that help me overcome all fears and doubts.â

From a professional point of view, Vjollca finds her biggest fulfilment in the success that her team achieves: âI can easily say that I excel today because of my team. At the moment, my team consists of 203 people and when I see them doing their jobs with love, when I see their commitment to provide a safe environment for our community, they remain my biggest motivation. Equally, our citizens motivate us just as much, because they cooperate with us and help us prevent and solve crimes so that, ultimately, their lives are safer.â

Having a team comprised of colleagues who love their job is not coincidental. A good manager is one of the key contributors to a healthy working environment. In this sense, Vjollca says that her management style is to be part of the team: âI talk to every member of my team and Iâm ready to take on board any advice and recommendation they might have that could benefit the security situation. Every day I start with a positive thinking and the assumption that my team is doing a great job and it does then turn out like that. I am an optimist who focuses on the qualities of the others, I know how to appreciate and recognize the good results that my team produces by also treating everyone equally.â

Pressure and stress come by default with her line of work. How does Vjollca prevent the stress from reflecting onto her team members? ââI have a special method: I always refrain from yelling. I use that energy to focus on solving a problem and making sure that it is clear to parties involved what is going on and how we are here to protect and serve the people always in compliance with the respective laws that are in force.â

A very interesting fact about Commander Vjollca Hoti, is that she is the only member of the Kosovo Police who received the International Award for Bravery â Medal of Valor, which was awarded to her in the 53rd Conference of the International Association of Women Police in 2015. The recognition came after Vjollca and her colleagues bravely and successfully responded to save lives during an armed quarrel among a few civilians. Through the years of work, she also mentions that Kosovo Police has enjoyed a wonderful professional cooperation with EULEX through various trainings and study visits where best European practices were shared.

When she is not engaged with all the police action, Vjollca loves hiking and reading books on positive thinking, which, she claims, have tremendously helped her see life differently and focus only on the positive things that it offers.

Looking back at her 20-year-old self, as a powerful woman in the security sector, Vjollca would say to never give up and believe in herself no matter the circumstances. As a strong advocate for women empowerment, she believes that itâs important for women to fix each otherâs crowns and support each other on every step of the way.