Interview of EULEX Head of Mission, Wigemark, with Koha Ditore and koha.net 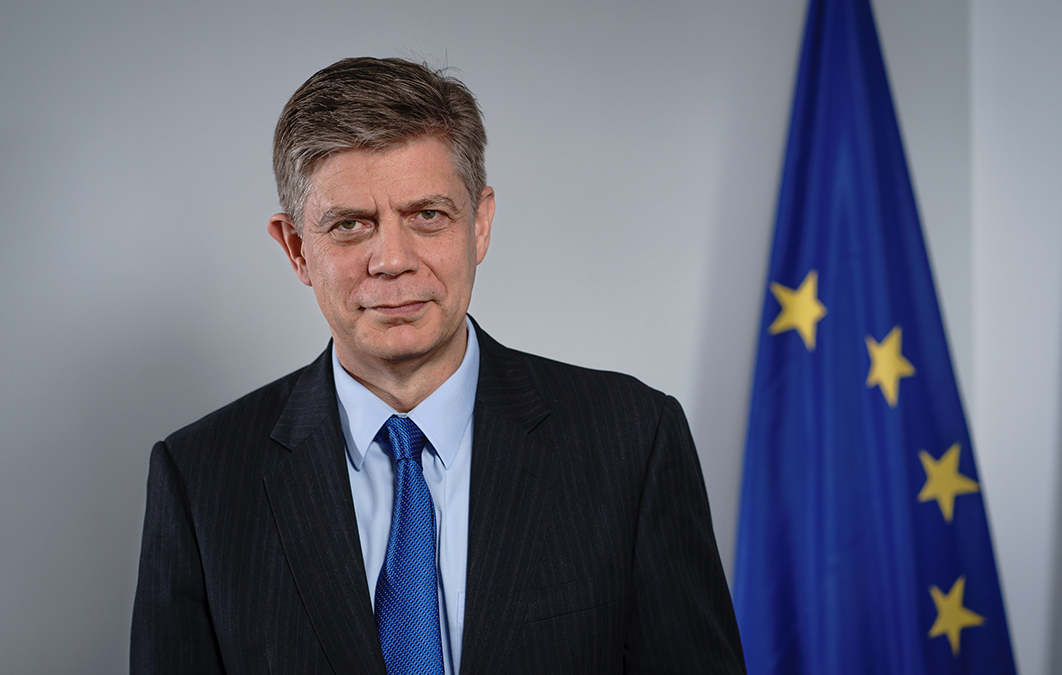 The Head of EULEX, Lars-Gunnar Wigemark, gave an exclusive interview to daily Koha Ditore and koha.net portal and spoke about his first steps as EULEX Head, EULEXâs assistance to Kosovoâs rule of law institutions, as well as issues such as corruption, war crimes and youth.

Due to the fact that he was recently appointed as Head of EULEX, the first question was about his first steps in this position.

âOne of my first steps as EULEXâs new Head will be to ensure that EULEX remains âfit for purposeâ, which means a reliable, fair and honest partner for our Kosovo rule of law partners. This is especially important with a new government in office whose stated intention is to have an independent, impartial and professional justice system in Kosovo and to restore faith in it,â Wigemark said.

EULEX Head also noted the Mission will continue to offer tangible, timely and useful assistance to all Kosovo institutions EULEX works with so that they can take full ownership of the much needed reform processes and continue their journey on the European path.

âThis is particularly important given the European Commissionâs revised enlargement methodology, which was adopted last week and aims at making the EU accession process more credible, with a stronger political steer, more dynamic and predictable.  As you probably already know, the Commission stressed how the so-called fundamentals, in particular the rule of law, should become even more central in the accession process,â said Wigemark, adding: âThis is where EULEX comes in â an EU Rule of Law Mission tasked by the EU Member States with assisting the Kosovo authorities in establishing sustainable and independent rule of law institutions on its EU path.â

On the issue of corruption and the fact that Kosovo ranks 101st on the Transparency Internationalâs Corruption Perceptions Index 2019, Wigemark said. âCorruption remains widespread and an issue of concern. The fight against corruption has slowed down, in particular in respect to investigating and prosecuting high-profile cases. While there is some improvement in the speed of handling anti-corruption cases, several cases were recently completed with across-the-board acquittals.â According to the Head of EULEX, âsome progress has been recorded in the area of criminal justice. But outside influence in criminal proceedings remains a serious obstacle. More needs to be done to effectively counter pervasive corruption, through the advancement of reform processes in the area of criminal justice and the rule of law. EULEX carries out systemic monitoring of selected corruption cases and we assess the functioning of the Kosovo judiciary in terms of procedural, legal and human rights complianceâ.

Asked about the judiciary, Wigemark noted the change in mandate of EULEX and added: âIn June 2018, the Kosovo authorities took over responsibility for investigating, prosecuting and adjudicating cases at all levels. For the first time in post-conflict Kosovo the local justice system no longer includes international judges and prosecutors. This demonstrates a new level of maturity of Kosovo and I see this as a joint achievement made by EULEX and the Kosovo judicial and prosecutorial system.â He further pointed out that Kosovo courts and prosecution offices are now dealing with increasingly complex and sensitive cases, which present challenges. âDespite the fact that some progress has been made, perceived political interference in the judiciary, slow processing of high-profile cases and a tendency for lenient sentences in gender-based violence cases persist,â Wigemark said, adding that âEULEX is carrying out a robust monitoring of selected criminal and civil cases, including high-profile cases and cases previously dealt with by the Mission. This monitoring is unique to the extent that it allows the Mission to go beyond public court hearings and look at the entire criminal justice chain â from investigation to prosecution, trial monitoring and sentence execution.â

Wigemark also stressed that there are also some positive developments in the judiciary: âThe Kosovo Judicial Council took action to address some of the shortcomings EULEX identified under its case monitoring mandate, including the need to reduce the high rate of unproductive trial hearings, to rely more systematically on the blind allocation of judges to trial panels and to avoid the reliance on fixed panels at the Special Department of the Basic Court of Pristina dealing with SPRK cases. All of this is conducive to an increase in access to justice and a more independent and impartial judiciaryâ.

He added that EULEX continues to provide support to the President of the Mitrovica Basic Court in the implementation of the EU-facilitated Justice Agreement, as well as technical support to the implementation of the EU-facilitated Freedom of Movement agreements and the agreements and technical protocols related to Integrated Border Management.

Elaborating on the rule of law in Kosovo and the progress that the Kosovo Police has made, the EULEX Head said: âThe Kosovo Police has managed to become one of Kosovoâs most trusted institutions and one of the best performing across the Western Balkans. Of course, there is still room for improvement and it is important to continue making progress. Thanks to hundreds of co-located experts seconded to EULEX from police services of many EU countries monitoring, mentoring and advising their Kosovo colleagues we have contributed to the professionalization of the Kosovo Police.â

The Head of EULEX also said that EULEXâs Formed Police Unit should maintain its capability as a second security responder in Kosovo and conduct training courses with Kosovo Police and KFOR, including on improving Kosovoâs Police crowd-and-riot control capabilities. Wigemark continued saying that after successfully handing over all police case files to the Kosovo Police, EULEX Police conducts a robust monitoring of police cases, in particular on crimes under international law, gender-based violence and hate crime. âThey furthermore provide recommendations on addressing those issues as part of a unique EULEXâs case monitoring mandate that follows the entire criminal justice chain,â he noted.

Regarding the Correctional Service, the Head of EULEX said that there is progress in prison administration, operations and security management, adequate treatment of high-risk and high-profile prisoners, as well as escort of inmates and court security. âThe recruitment processes within the Kosovo Correctional Service have seen an improvement. And more assistance is needed in developing a sustainable system of rehabilitation of inmates and in guaranteeing equal access for all inmates to benefits and medical treatment. EULEX will continue to support the Kosovo Correctional Serviceâs efforts to develop modern management practices and strengthen its capacity to counter undue interference and preferential treatment of inmates,â he explained.

Another rule of law area where EULEX will continue to provide assistance is the Institute of Forensic Medicine. âEULEX experts continue to work together with our local counterparts to determine the fate of missing persons by offering expertise and advice in the identification of potential mass graves and the exhumation and identification of victims from the Kosovo conflict.â

Wigemark noted that EULEX continues to manage its residual witness protection programme and assists the Specialist Prosecutorâs Office and Specialist Chambers with logistic and operational support in line with relevant Kosovo legislation.

Asked about war crimes in Kosovo, Wigemark said that âjustice has to be rendered and anyone who committed war crimes should be held accountable through due process.â

âAccording to statistics covering the work of UNMIK, EULEX and the local judiciary for the period from October 1999 to October 2018 by the Humanitarian Law Center Kosovo, an independent organization that supports the implementation of an inclusive transitional justice, of the 39 defendants sentenced for war crimes in Kosovo 38 were convicted by EULEX. During the same period, out of 48 war crimes indictments, 22 were filed by EULEX, including two filed by mixed teams of EULEX and local prosecutors. As you are aware, EULEX could not proceed with cases for war crimes allegedly committed by individuals who were at large, as the Kosovo law did not and does not allow indictment in absentia. These case files, together with all police, prosecutorial and judicial case files, were handed over to the Kosovo authorities in December 2018. As you may know, there is a legislative change pending in the Kosovo Parliament to allow for war crimes trials in absentia. I hope that any such changes, if adopted, will take into due consideration applicable human rights standards and crucially their effective implementation.â

Talking about the current situation, Wigemark said that progress in the area of investigating and adjudicating war crimes has been limited. However, he noted that âthe Kosovo prosecution and police are working on several high-priority cases, while the Kosovo Police has made significant progress by including all transferred war crimes police files received from EULEX in an advanced database which will facilitate future investigations. This database was established with EULEX support. Also, a specialized department for war crimes has been established as part of the SPRK. Recently, there has been an increase in the filed indictments and hearings were held in several war crimes cases, which is positive. Moreover, a sentencing judgment was delivered in a war crimes case recently.  However, there is a need for increased regional cooperation in war crime investigations, including between relevant authorities in Belgrade and Pristina.â

Last but not least, Wigemark was asked about young people in Kosovo: âDuring my first couple of weeks in Kosovo I have been struck by the energy and vibrancy of your people. They are the future and to avoid brain drain, Kosovo institutions need to create an enabling environment for youth participation in the decision-making process, ensure the youthâs inclusion and representation in institutions based on meritocracy, address the youthâs needs and respond to their requests, empower youth advocacy and be open to change. Leaders and institutions in Kosovo need to inspire a vision and create a positive perspective for the youth. It goes without saying that all areas of democratic governance, including the rule of law, rely on the inclusion of all members of a society, especially the youth.â