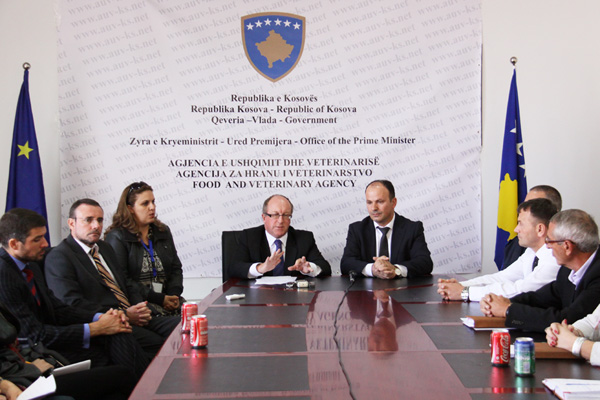 Today, the EULEX Deputy Head of Mission, Andy Sparkes, visited the Kosovo Food and Veterinary Agency (KFVA). During the meeting with Dr Valdet Gjinovci, KFVA Chief Executive Officer, he was informed about their work, facilities, staff, and projects. KFVA is at the forefront of trying to ensure that imported foodstuffs are safe for human consumption, and apply the highest EU regulations and standards.

During the meeting it was also emphasized that trade in food is often a target for organised crime. The Agency works hard to detect and prevent potentially dangerous imports of these food consignments, while also helping regular importers in their commercial enterprises through streamlining bureaucratic procedures.

Addressing the media after the meeting Andy Sparkes said: âKFVA will be one of the key agencies, along with the Kosovo Border Police and Kosovo Customs, in developing Integrated Border Management, which is important for safeguarding all people in Kosovoâ.

EULEX will donate ten vehicles in the coming months to KFVA to support the agency in its work.