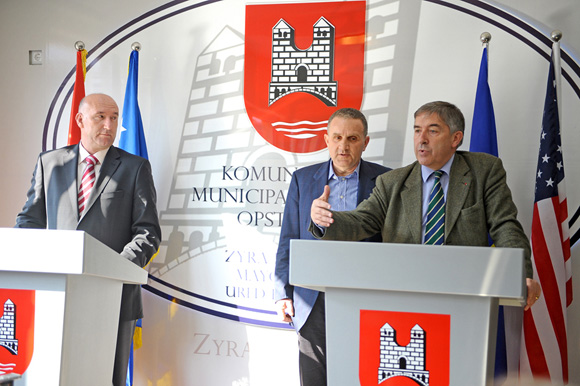 The Head of EULEX, Xavier de Marnhac, on a visit to Peja/PeÄ, met the Mayor of the municipality Ali Berisha. They discussed the rule of law situation in the local region. Also present at the meeting were senior officials from the EULEX Justice, Police and Customs Components, as well as senior officials from the municipality and local rule of law officials.

Mr de Marnhac said Kosovo had set itself some important goals, such as visa liberalisation, but that these goals could only be achieved if there were improvements in the rule of law. He said EULEX would continue to give support, but the final results would depend on the local institutions themselves.

âToday, we reviewed the situation of public security in the region. There are very positive trends, but there is still room for improvement. EULEX will be there to support the rule of law institutions. But in regard to these objectives Iâve mentioned in the end it will be up to Kosovo institutions to do their jobâ, said de Marnhac. âThatâs the reason I was happy to talk to people representing the police, the justice, the customs, because each of them through their actions has the chance to support the achievement of these objectivesâ, added de Marnhac.

The Mayor of Peja/PeÄ, Ali Berisha, said that the security situation in the municipality was improving every day, which is a positive trend for economic and social development.

âThe level of criminality is decreasing; however, it is a constant request of the municipality institutions to police, judiciary and prosecution for greater commitment, and cooperation with EULEX in order to decrease even further the criminality in our municipality. It is well known fact that the level of security determines our future, our development objectives, economic development, as well as our orientation towards Europeâ, said Berisha.

During the day, the Head of EULEX also met mission staff working in the Peja/PeÄ region.