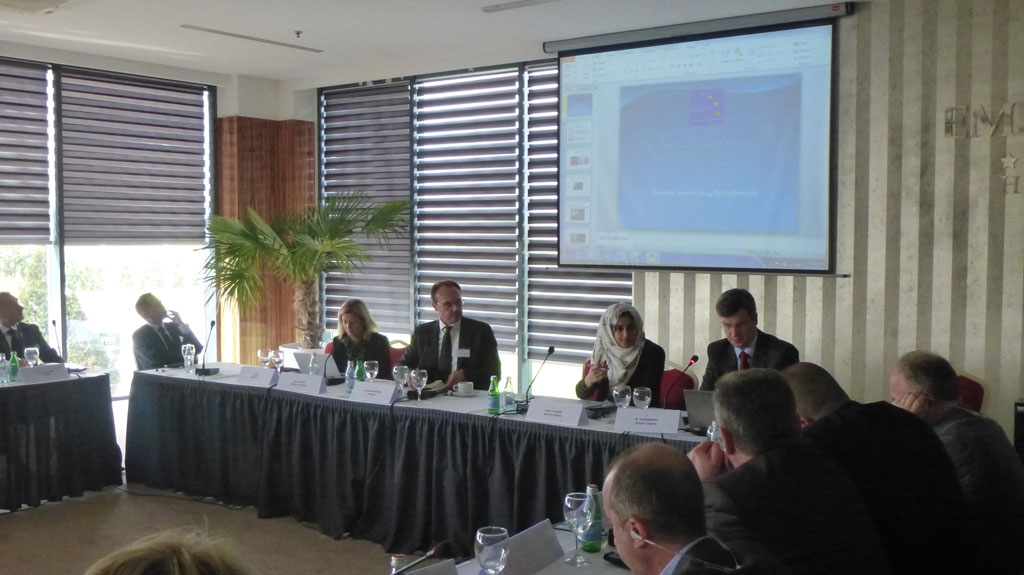 On 13th of November, prosecutors Robert Kucharski and Salma Yousef from the Special Prosecution office of EULEX, presented at the regional seminar on 'The fight against counterfeit medicines in South Eastern Europe' organized by "Pole de Belgrade". The seminar was done in partnership with United Nations Office on Drugs and Crime, and the multinational pharmaceutical company, Sanofi S.A. with the headquarters in Paris, France.

The regional seminar was an organized effort for exchange of information and experience channelled towards the goal of fighting counterfeit medicines, a growing concern on the South Eastern Europe region.

Facts point that trafficking in counterfeit medicines results as a major criminal phenomenon at the global level. These facts were further confirmed after a multidisciplinary research was launched by "PÃ´le de Belgrade", the inter-departmental unit against organized crime of the French Embassy in Serbia, a unit that was established in 2004 as an inter-regional competency centre for the fight against organized crime in South-East Europe.

This work suggests the existence of traffic of fake drugs in this part of the world at a scale probably greater than what the figures imply, indicating a phenomenon with regional characteristics.

Trafficked counterfeit medicines are sold at very low prices making them very attractive but in fact they pose a real danger for the public health and safety.

According to Salma Yousef, the prosecutor representing EULEX in the seminar, the market is extremely lucrative and the trafficking of counterfeit medicines can yield significant profits, even more so than drug trafficking for example.

Yousef asserts that in many cases these profits are channeled to criminality, making EULEX's interest multi-faceted in terms of protecting the public through early identification, and when suspects are caught, identifying links with other criminality which are likely to fall within the competence of SPRK, such as organized crime.

On their presentation, EULEX prosecutors Yousef and Kucharski highlighted the importance of the interagency cooperation in the success of brining perpetrators to justice. "Working together and sharing information from the outset is vital for fighting this threatening phenomenon" asserts Yousef.

Of this opinion was also Minister of Justice, Hajredin KuÃ§i who emphasized during a speech that he made at the seminar that the fight against this phenomenon calls for extended cooperation between different agencies for implementing the rule of law. Furthermore, KuÃ§i stated "I consider that in addition to the inter-institutional cooperation within Kosovo, it is important that there is an elevation of regional cooperation and cooperation with EU institutions, such as border monitoring and exchange of information".

At the end of the workshop, the participants were invited to adopt a series of recommendations and commitments. Hence, it was decided that there is a need for an establishment of an informal regional computer network against fake drugs. They also decided that sharing the commitment, reflection and discussion between all stakeholders (police, justice , drug agencies, the private sector) is very important.

Other speakers on the seminar included the Minister of Health in Kosovo, Mr Ferid Agani, and Ms Maryse Daviet, Ambassador of France in Kosovo, while other attendees included many international and government agencies representatives.