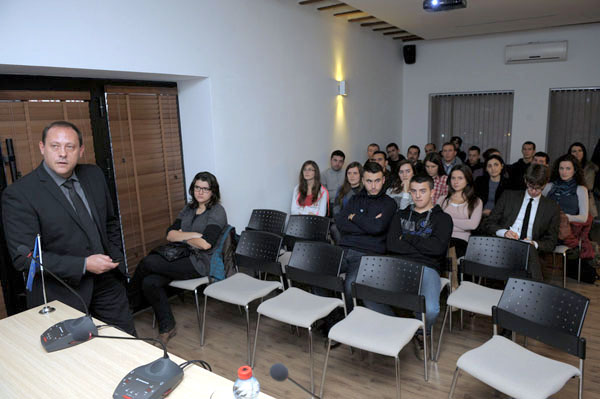 Around thirty-five, mostly medical students, participated in the EU Master Class about âForensic Investigationsâ, held in the Pristina EU Information and Cultural Centre on Monday 4 February. Alan Robinson, EULEX co-Head of the Department for Forensic Medicine, a highly specialized Kosovo institution for forensic research, provided the students with an in-depth lecture about forensic science.

With photos of crime scenes he explained to students about the techniques that are being used to reconstruct crimes that have happened over a decade ago. Robinson outlined how conclusions can be reached by âreading the bonesâ of human remains, in order to identify the victims of war and establish the likely cause of death.

He emphasized the importance of the return of bodily remains of the missing to affected families, in order for relatives to be able to move on with their lives. This is not only important because of emotional reasons, but also because of the legal and civil consequences of establishing that a person has died. Identification of bodily remains, can lead to criminal charges against perpetrators of crime. But it can also lead to final settlements of heritage and other practical matters.

So far with the help of EULEX over 300 remains of the missing have been identified and returned to their families. Still 1760 people remain missing from the 1999 Kosovo war.

Students of the Master Class had a lot of questions about technical aspects in the search for the Missing in Kosovo and especially about the role of international organisations, like EULEX, in this process. The participants welcomed the information about this sensitive topic. People who missed out on this lecture are invited to watch the documentary âIn search of the Missingâ, available at: http://www.eulex-kosovo.eu/en/videos/2012-02-21.php

This EU Master Class was the first in a series of specialised lectures about the rule of law, organised by the EU Information and Cultural Centre together with EULEX. Up-coming lectures will be announced soon.