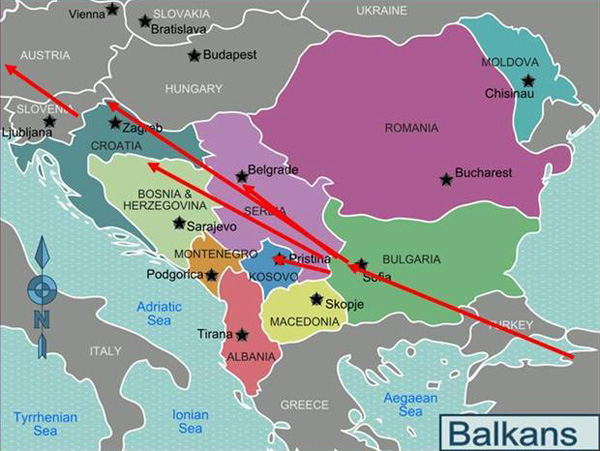 Crime knows no borders. Trafficking in human beings and smuggling of migrants even less so. This profitable business is often built on the suffering of people trying to leave conflict zones for a better future. Migrant smugglers use this opportunity to build their cash empires, abusing peopleâs desperation and breaking national and international laws.


The Balkans, and particularly Kosovo, is a constant transit attraction for migrants from North Africa and the Middle East heading towards Western Europe

The life of migrants is put at great risk. The conditions they travel in through the borders of various countries are awful. They are often stuffed like cattle in small hidden places inside busses and trucks, and forced to live through hunger, cold and dirt for days. Sometimes, they even have to walk across borders over illegal routes through dangerous forests, mountains and rivers.

A story of this type of smuggling, always revolves around migrants and how they, mostly involuntarily, are forced to travel in search of a better life. They do break the law, no question about it. But, the sad part is that this is only one side of the story.

The other side of the story focuses on those who take advantage of the misery of these migrants. These are the smugglers, organisers, guarantors, drivers, document falsifiers and so on, who, in return for huge amounts of prepaid cash, facilitate the dangerous illegal travel of migrants across borders. This crime touches every country and territory, and Kosovo is no exception.

With the help of EULEX, Kosovo is developing rule of law capacities to fight such crimes within its borders and boundaries. At the same time, EULEX and Kosovo Police are contributing to disrupt criminal networks beyond Kosovoâs territory and stopping the exportation of organised crime and other serious crimes to the larger European family.

The recent operation of 29 January 2013 which targeted smugglers was a prime example. One-hundred-three suspects were arrested in ten countries and one-hundred-seventeen searches were conducted. Three persons were also arrested in Kosovo on the same day. Twelve others of the same network had already been arrested in Kosovo in 2011 and 2012.

âThis is an example of an excellent joint investigation conducted by EULEX and Kosovo police, which has led to the arrests of dozens of criminals, who were involved in the smuggling of illegal immigrants from one continent to another,â said Nick Dove, Head of the EULEX Organised Crime Investigation Unit. âThe contribution of EULEX and Kosovo police was unprecedented in terms of such a large scale operation that came to fruition,â added Dove.

The so-called Fimathu project was conducted under the umbrella of EUROPOL and involved cooperation with Kosovo, Montenegro, Hungary, Bosnia and Herzegovina, Austria, Italy, Slovenia, Croatia, France, Germany, Greece, Czech Republic and Slovakia. Without this partnership and cooperation, this simultaneous action would not have been possible.

Intelligence and information collected in Kosovo by EULEX and Kosovo police were crucial to the successful conclusion of the Europe-wide operation related to the smuggling of migrants. The Balkans, and particularly Kosovo, is a constant transit attraction for migrants from North Africa and the Middle East heading towards Western Europe. In this case, some of the main leaders of this transnational organised crime network were operating from Kosovo and were arrested there.
Hungary, which hosted an international press conference on January 30, 2013 to present the impressive results of the operation, thanked the countries that participated in the common day action and highlighted the contribution of EULEX in the disruption of organised crime networks in general and the smuggling of migrants in particular.

The participants mentioned the Tisza river tragedy as an example of the catastrophic consequences of illicit smuggling of migrants, which resulted in the death of sixteen people in 2009. In this context, the Hungarian Head of the Illegal Immigration Unit, Mr Zoltan Boross praised the good cooperation with EULEX Kosovo the Tizsa river case. âEULEX has played a key role in the investigation of the Tizsa river case and in bringing perpetrators to justice,â Mr Boross said.

The Tizsa river trial, which was the most prominent case on smuggling of migrants ever to be adjudicated by EULEX, concluded with seven defendants being found guilty and sentenced to a total of sixty-six years of imprisonment.

For the EU member states who gave EULEX a mandate in Kosovo - this is certainly a return on their investment.