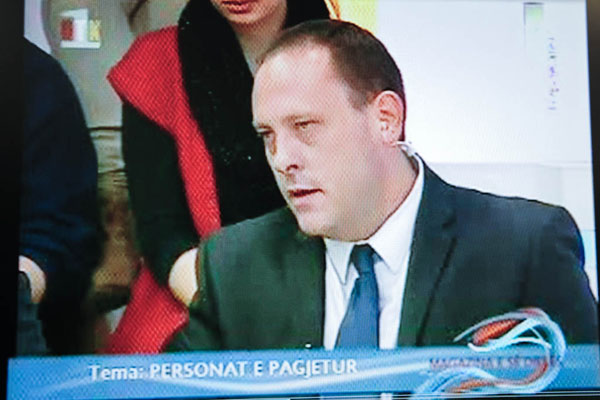 A TV debate about the issue of missing persons which involved EULEX was broadcast on the RTK channel on Sunday, 20 January.


Alan Robinson, the Co-Head of the Department of Forensic Medicine (DFM) during the debate on RTK

Alan Robinson, the Co-Head of the Department of Forensic Medicine (DFM) participated in the debate. He explained the work that EULEX does in the search for the missing persons. Other guests included Arsim GÃ«rxhaliu, the local Co-Head of DFM, Cihan Akyildiz, Head of the EULEX War Crimes Unit, Prenk Gjetaj, Commissioner for Missing Persons, Haki Kasumi, Coordinator of the Coordinating Council of Associations of Families of the Missing in Kosovo and Milorad Trifunovic, President of the Association of Families of Missing Persons in Kosovo.

The debate was preceded by the presentation of the thirty-minute TV documentary âIn search of the Missingâ, filmed and produced by EULEX Press and Public Information Office. The documentary focuses on the challenges faced in the process of solving missing personsâ cases. Forensic archaeologists, anthropologists, civil society, outreach assistants and exhumation coordinators all contributed to the film. The programme also focuses on the monitoring, mentoring and advising efforts of EULEX experts, in order to increase local capacity.