EULEX fully committed to determine the fate of the Missing 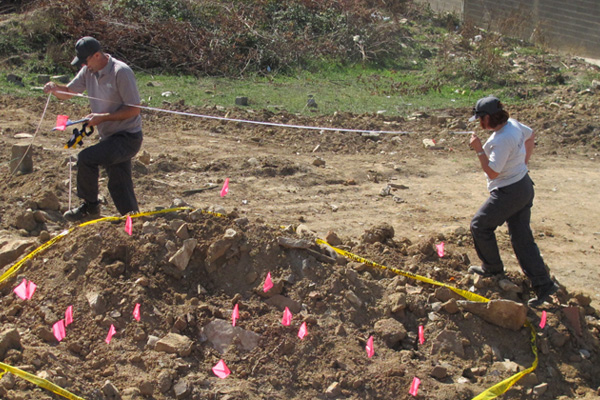 Over the last three weeks the EULEX Department of Forensic Medicine (DFM), together with its local counterparts from the Ministry of Justice, and the EULEX War Crimes Investigation Unit (WCIU), has been excavating the former Yugoslav Army Firing Range north of the city of Prizren.

The operation has consisted of two phases: a clearing phase and a forensic phase. In the first phase, EULEX DFM relied on the assistance of the KSF Battalion of Engineers, which deployed heavy machinery for five days to clear several tonnes of rubble which had covered the area of interest. The second phase began a few days later and is on-going.

Alan Robinson, DFM Co-Head said, "This field operation is the culmination of two years of research by my team. The site has a very complicated history dating back to April 1999 when the bodies of victims from several communities inside a 20 km radius were brought here and buried. Before the NATO forces entered Kosovo, many human remains were hastily exhumed and taken to the Batajnica mass graves, north of Belgrade. Then in the summer of 1999 and later in 2000, international forensic teams assessed the area and recovered a number of remains. However, since there are still a considerable number of persons missing from these events, we researched this case intensively and developed the hypothesis that a number of victims were left behind and may still be buried in this location. Given that we have found several bones already, it seems like our hypothesis is probably correct, although we still have a long way to go since the area is quite large".

So far dozens of human skeletal remains have been recovered, however, Robinson points out that "all the bones recovered are disarticulated and we cannot speak yet about a mass grave. Many of the bones that we found have suffered considerable degradation so it may be difficult to obtain DNA from them. However, some bones are well preserved and I am hopeful that once we get back results from our colleagues at the International Commission on Missing Persons, there will be a good chance that identifications (or re-associations to victims already identified), will be made".

Recently, human remains were also located in the village of Krusha e Madhe (Orahovac). Last week, EULEX DFM and WCIU assessed the site and recovered dozens of fragmented, burnt bones, "we have liaised with all relevant stake-holders and we have conducted an intensive field operation at this location last week", Robinson said. Additionally, a further field operation was conducted in the Decan area, although with no results.

"At the moment we are taking full advantage of the relatively favourable weather conditions to assess as many suspect locations as possible. EULEX remains fully committed to determine the fate of the Missing and we are working intensively with our counterparts to assist families to reach closure for these tragic events", Robinson concluded.