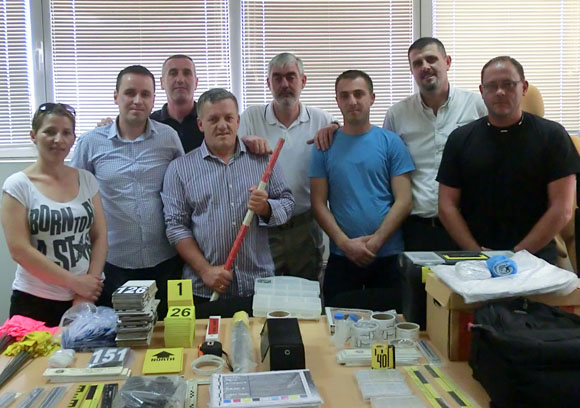 The EULEX DFM unit has donated forensic equipment to their local counterparts at the Department of Forensic Medicine (DFM). The donation consists of top of the range material to be used in exhumation work and medical death-scene investigation.

In the presence of Arsim Gerxhaliu, Director of the Department of Forensic Medicine and Alan Robinson, Head of EULEX-DFM, the EULEX Forensic Photographer, Alain Wittmann, presented the equipment to the relevant units.

Of course, this donation represents only a fraction of what the DFM needs to conduct its work. The DFM is developing rapidly and so it is good that some modern equipment has been made available to support the work of our Kosovar colleagues."

The equipment is an essential part of the increasing development of forensics in Kosovo since it allows local counter-parts to record and process exhumation sites and death-scenes in a more professional and consistent manner.

According to Alan Robinson, Head of EULEX-DFM, the equipment is separated into two groups: Death Scene Investigation and Exhumation. The Death scene investigation kits contain material which allows the DFM investigators to accurately reconstruct the context of a suspicious death. "Accurate recording of a death scene is crucial and can provide invaluable information to the forensic doctors who conduct autopsies, particularly in cases where the immediate cause and manner of death is not obvious", said Robinson.

Gerxhaliu expressed his gratitude to EULEX stating that âDFM is grateful for this support which will enable our staff to perform their duties in a more professional wayâ. Dr. Gerxhaliu also expressed his appreciation for Alain Wittmannâs dedication and professionalism.

âAlain will be very much missed by all DFM when he ends his mission in Kosovo. We will continue to work by the high standards that he has set in this departmentâ, said Gerxhaliu.