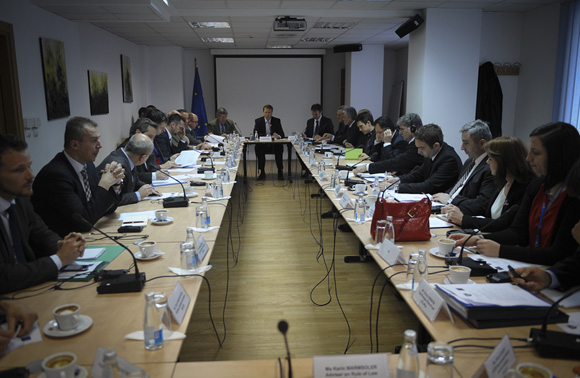 The Joint Rule of Law Coordination Board meeting (JRCB) held its regular meeting today at the EU Office in Pristina. The meeting was hosted by Samuel Å½bogar, EUSR/Head of the European Union Office, and co-chaired by Xavier de Marnhac, Head of EULEX, and Hajredin KuÃ§i, Deputy Prime Minister of Kosovo and Minister of Justice.

The participants agreed there have been some important developments since the last meeting, which should serve as good examples for progress in the coming months. They discussed positive steps in the transition process of FIC/FIU and two important pieces of legislation, the draft criminal procedure code and the draft law on the confiscation of illegally obtained assets. The Law on Witness Protection and the contribution of all the parties involved was also discussed.

In his opening remarks, the EUSR/Head of Office, Samuel Å½bogar said:

âThe EU has engaged with Kosovo in a number of significant processes that relate to the Rule of Law, be it the Structured Dialogue on the Rule of Law, the Visa Liberalization Dialogue or the Feasibility Study announced by Commissioner FÃ¼le last week. As such, the JRCB forms an excellent forum to jointly steer these processes here on the ground, create synergies, coordinate priority actions and track progress in implementation."

During the meeting EULEX Head of Mission de Marnhac stated:

âWhile we understand that the transition is underway, benchmarking is an important part of the process. The transfers should be benchmark oriented instead of time oriented. The main objectives remain the fight against organized crime and corruption and the continuation of the dialogue between Pristina and Belgrade.â

During the meeting, de Marnhac also noted that the Kosovo Correctional Service continues to require support but has âshown improvement, and has been identified as a transition area in the strategic review process.â

âI wish to welcome Mr. Å½bogar in his capacity of co-chair of the JRCB, and let me emphasise that in the past months there was good coordination between local institutions, EULEX and the EU Office, which resulted in positive developments in the areas of justice, police and customs. I would especially like to stress the increase in the effectiveness of the Agency for Administration of Confiscated or Sequestrated Property, which is already fully operational. The Kosovo Correctional Service has also achieved significant progress in combating negative phenomena, but always stressing the need for coordination with partners from EULEX. I also highly appreciate the recent visit to Brussels, where there were talks about the beginning of a structured dialogue about the rule of law, transfer of powers and transition of responsibilities from the European Union Rule of Law Mission - EULEX to the local institutions of the Republic of Kosovo, and the need to have a concrete plan in place in order to carry out this transfer that is expected to start this year.â