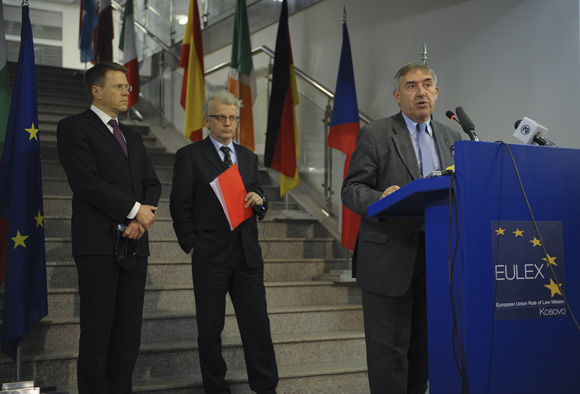 The EU Civilian Operations Commander, Hansjoerg Haber, has said the results of the Strategic Review into EULEX, will lead to a âstronger, leaner and more efficientâ mission. Mr Haber was speaking on a visit to Kosovo where he addressed EULEX staff and informed the Kosovo authorities about the details of the Review, which is expected to be finalised shortly.

It is already known that there will be a significant reconfiguration of EULEX. Member States of the EU want to extend the mandate for another two years. There will be a downsizing of both international and local staff, especially in the areas of police and customs. Work will concentrate in the justice area, especially with EULEXâs executive mandate. Additional resources are also expected to be allocated to northern Kosovo.

âEULEX has done a great job. But changing circumstances mean changing priorities. Significant progress has been made in some rule of law areas by the Kosovo institutions and therefore the EULEX mission must reflect that. EULEX will refocus its priorities, reconfigure and become stronger, leaner and more efficient,â said Mr Haber.

The Head of EULEX, Xavier de Marnhac, thanked Mr Haber for his support of the mission and praised the local authorities for their work.

âReal progress has been made by the Kosovo institutions. This new reality has to be recognised. But challenges remain, especially in the judiciary. We will redouble our efforts in this area, and become better equipped to face these challenges,â said Mr de Marnhac.

The EU Special Representative/Head of the EU Office in Kosovo, Samuel Zbogar, said:
âThere are several parallel processes of Kosovo-EU relations that we will focus on this year: from visa liberalisation to the feasibility study and EULEX will play a key role in them.â

The changes to EULEX will be implemented after 14 June 2012 when the new mandate is expected to take effect.