EULEX helps those in need 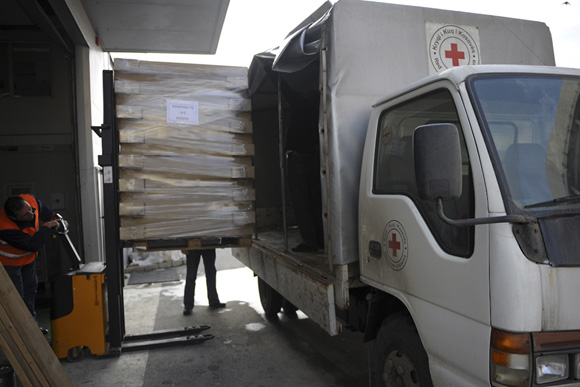 EULEX today has donated approximately 10.500 emergency rations packs to the International Red Cross in Kosovo, worth some 60,000 Euros.

The President of the Red Cross of Kosovo, Xhevat Shkodra, who received the donation, stressed the importance of the ration packs saying that the situation continues to be difficult in some of the region of Kosovo due to the big snow falls and the strong winds.

âWe tried to help those in need during the emergency situation with all our capacity and with the help of other donating organisations. I want to thank very much EULEX for this meaningful donation, this big amount of the emergency rations will be delivered to other part of population that didnât receive any help yetâ said Shkodra.

The Head of EULEX Administration, Gerardo Fuertes, who was present during the handover, said that EULEX is always ready to help if it can do so.

âWe would like to provide more help but we have limitations within our mandate, but we can always find different ways to provide help to those in needâ said Fuertes, thanking the Red Cross for enabling EULEX to help Kosovoâs people in need.

Xhevat Shkodra said that this donation to Red Cross is seen as a grand act from EULEX, which âmakes the relation with EULEX much strongerâ.

âHelping hand from EULEX came in just the right moment because it is expected that some regions of Kosovo can be affected by the water floods after the snow melt and we will make sure that those in need for help will be provided with the emergency rations packâ added Shkodra.

Mission Emergency Rations packs from EULEX regional Log-Bases such as Peja/Pec, Prizren and Gjilane/Gnjilane are already donated to the regional offices of the Red Cross Kosova.

EULEX and Kosovo Red Cross will continue the cooperation in order to explore the possibilities of future donations for the people in need living in Kosovo.

According to Shkorda, Red Cross of Kosova has very strict rules in the distribution of the donations, thus preventing discrimination and providing equal opportunity for all families in need.

The Red Cross of Kosova will provide a distribution report to EULEX.