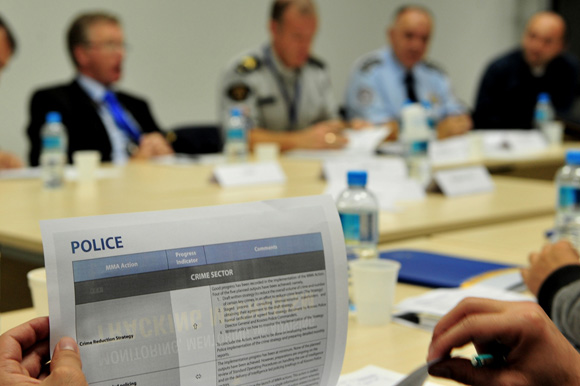 At the end of January, EULEX police submitted three reports about the progress of Kosovo Police (KP) in three specific areas. Those areas were: the implementation of a crime database (to identify and register instances of ethnically-motivated crimes), the reform of the Directorate of Intelligence and Analysis and an enhanced budget administration.

The reports concluded that in each of these three fields, significant progress was made by KP, and that EULEX assistance was no longer required. EULEX police experts provided substantial support in order to achieve these objectives.

The EULEX approach to support KP

Francis Harris, a Programme Manager for EULEX, is helping to coordinate assistance to KP. He explained that EULEX assistance to KP is mainly aimed at the management level.

âBased on a comprehensive review we made in 2009 we concluded that the operational capabilities of Kosovo Police were generally good, while certain weaknesses were identified in management capabilities, especially on the senior level. These findings clearly reflected the stage of KP development at that time, when KP just started to function independently, without UNMIK supervisionâ, explains Francis Harris.

Based on this analysis in 2009, EULEX decided to assist KP with management advice and expertise to help build a professional police organisation. EULEX police experts were appointed as the counterparts to their KP colleagues at senior management positions, to act as mentors. Action plans were jointly identified to professionalise the KP organization and bring it up to European standards. The implementation phase of each of these action plans is closely monitored by EULEX, to track if progress is indeed being made.

Two of the action plans that KP implemented are related to Intelligence-Led Policing, a policing model that has emerged in recent years as a key concept for police organisations worldwide. It is a model of policing in which intelligence serves as a guide to operations, so you have a more targeted approach to crime control. This approach requires a proper registration of crime data and an analytical capability to identify crime trends and focus resources on priority areas.

Francis Harris explains that minority policing is one of the areas were application of this model makes a big difference. âWhen we started our work, the system to register and identify ethnically-motivated crimes was very poor. If you are keen on developing a police organisation that is minority-sensitive, which KP is committed to, it is very important to have the facts clear. You have to know how much and where ethnically motivated crimes are mostly occurring in order to combat themâ, says Francis Harris.

With the help of EULEX, KP have been revising their procedures on crime registration since 2010, to make it more reliable and suitable to analyze data on ethnic minorities. The new system was implemented in 2011 and monitored over a period of many months by EULEX police. The recent EULEX report concludes that KP now has the capability to properly collect, collate and analyse data regarding crimes involving ethnic minority victims.

The second action plan that has now been completed by KP, was to develop the organisational structure and human capacity to conduct crime analysis. In a project of more than two years, EULEX assisted the Directorate of Intelligence and Analysis as the central hub of KP criminal intelligence system.

The last KP action plan that EULEX assisted, is enhanced budget administration, a programme designed to improve the administration of budget and finance of the KP organisation. Budget administration, might sound very far away from policing work, but it is a crucial ingredient in building a sustainable and professional organisation, explains Francis Harris. âKosovo Police is chronically underfunded in some areas, especially in the regions. This directly affects the way policing services are delivered to local communities. One of the aims of this action plan was to support a long-term budget strategy that enhances accountability, whilst improving the timely provision of goods and servicesâ, says Harris.

The EULEX report of January 2012 records the important progress that has been made in this respect. Through this MMA Action the KP has improved the administration of budget and finance in the organization, and developed a long-term strategy, multi-year projects, and a thorough review of the benefits of decentralization.