Identifying rule of law priorities for Kosovo in 2012 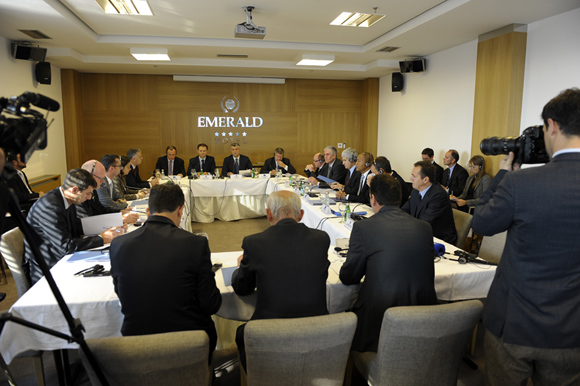 A special meeting of the Joint Rule of Law Coordination Board (JRCB) has taken place with the aim of identifying the priorities in the field of rule of law for 2012.

Co-chaired by the Head of EULEX Xavier de Marnhac, Deputy Prime Minister and Minister of Justice Hajredin KuÃ§i, and the Acting Head of European Commission Liaison Office (ECLO) in Kosovo Khaldoun Sinno, this JRCB meeting focused on prioritizing a number of initiatives which will serve as a roadmap for next yearâs efforts to achieve progress in the field of rule of law.

Among the priorities discussed were: Law on Confiscation of Illegally obtained Assets, Law on Interceptions, Amendment of the Criminal Code and Criminal Procedural Code, Implementation of Integrated Border Management, Money-laundering, dealing with backlog cases in the justice sector, as well as the strengthening the coordination between police and judiciary.

The Head of EULEX, Xavier de Marnhac, said that many of these topics have already been identified in the European Commission Progress Report for Kosovo.

âThe JRCB is the key high-level forum to jointly agree on common priorities in the rule of law sector, with a particular focus on areas that contribute to the European Commission Progress Report for Kosovoâ, said de Marnhac, adding that âover the past year the Government, European Commission, and EULEX have established close cooperation through this forumâ.

Kosovo Prime Minister Hashim ThaÃ§i, in his opening statement said that the Kosovo Government was committed in achieving progress in the rule of law.

âThe rule of law remains one of the priorities in the agenda of the government; therefore this is a very important meeting. The rule of law is a precondition for a normal functioning of a society and a country. It is, and it will remain a high value of modern societies. We remain strongly committed to push forward our government agenda in realizing our joint goals in this very important fieldâ, said Prime Minister Hashim ThaÃ§i.

The Acting Head of ECLO Khaldoun Sinno, said that that the European Commission gave great attention to the rule of law, which is also reflected in its progress reports.

âStrengthening of the rule of law has been identified as a continuing major challenge and as a crucial condition for the countries moving closer to European Union membership. To these issues has been given greater attention, in recent years at all states of the accession process in line with the new consensus on the enlargementâ, said Khaldoun Sinno, the Acting Head of ECLO.

This was the last JRCB meeting for 2011.