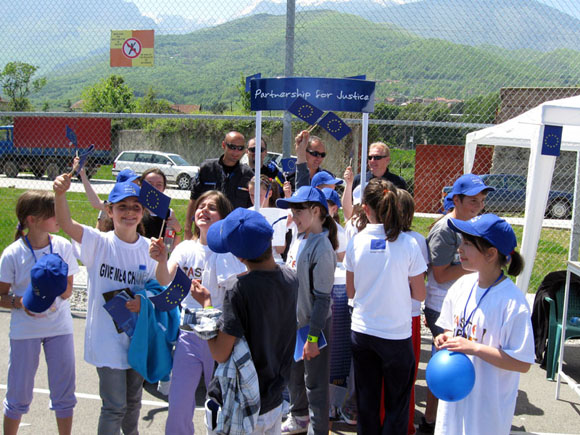 To mark Europe Day on 9 May, sports tournaments, concerts and fairs were organised around Kosovo in Prizren, Peja/Pec, Gjilan/Gnjilane, MitrovicÃ«/a and Pristina. EULEX staff attended many of the events, handing out information material and discussing the work of the EU and EULEX with visitors. In Mitrovica, EULEX provided t-shirts and baseball caps to children playing football and basketball.

âIt is important to remember that EULEX is only a part of a larger family of EU institutions. Europe Day is a good opportunity to promote the values that the EU represents â human rights, democracy, freedom of expression,â said Xavier de Marnhac, the EULEX Head of Mission.

EULEX was also present in Brussels. A team from the Press and Public Information attended the Open Day events in the Council building, joining colleagues from other EU Missions around the world. Thousands of visitors attended the event. Herman Van Rompuy, President of the European Council, personally visited the EULEX stand and leant his support to the Mission.