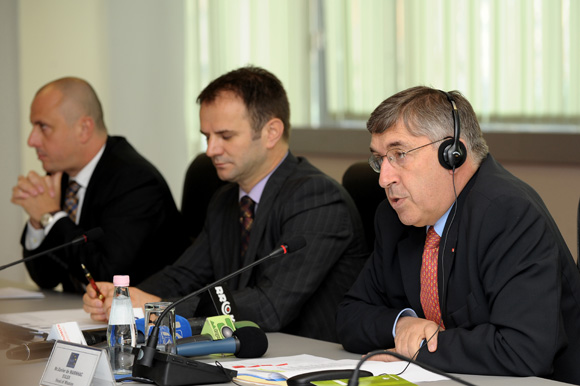 The Head of EULEX has said that one of the priorities of the mission this year is to concentrate on supporting Kosovoâs efforts to improve results for the Progress Report.

His comments followed the latest meeting of the Joint Rule of Law Co-ordination Board (JRCB) in Pristina where senior officials of EULEX and Government Ministers co-ordinate their work in the rule of law area.

âThe relationship between EULEX and the Government remains as strong as ever. We have decided that, over the coming months, we will together concentrate our efforts on obtaining better results for the all-important Progress Report,â said the Head of EULEX, Xavier de Marnhac.

The JRCB has traditionally been chaired by the Deputy Prime Minister and the Head of EULEX. But to emphasise the importance of the European Commission Liaison Office (ECLO) and its principle role in drafting the Progress Report, the Head of ECLO has now become the third co-chair of the meetings. Â Â

During the meeting, approval was given to the joint six-month work plan of the Ministry of Justice, Ministry of Internal Affairs, and Ministry of Finance together with respective EULEX components, in order to provide a qualitative improvement in the rule of law area during these six months, before the Progress Report.

The Deputy Prime Minister, Hajredin KuÃ§i, said the Government regarded the rule of law as a priority.

âIn the area of rule of law, a series of laws have been adopted, and we expect great commitment on the implementation Â of these laws throughout the territory of Kosovo, and in full cooperation with EULEXâ, said Mr KuÃ§i.