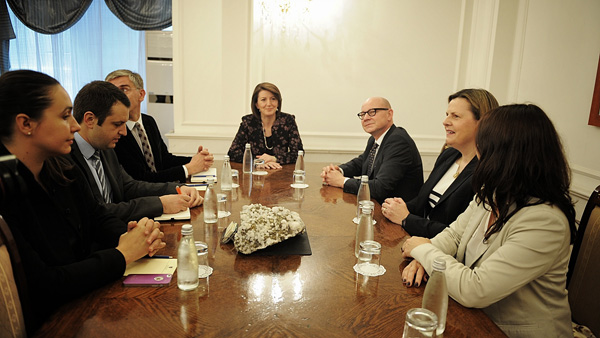 Today Mr. Gabriele Meucci, the new Head of Mission for EULEX Kosovo held a meeting with President Jahjaga, his first formal meeting with a representative of a Kosovo institution.

The Head of Mission and President Jahjaga discussed issues of mutual interest and concern in the Rule of Law field, specifically the challenges around fighting organised crime and corruption. They also discussed the new mandate of EULEX, with the emphasis of the Mission shifting to the passenger seat from the drivers’ seat. Speaking after the meeting, Mr. Meucci said:

"I had an excellent first meeting with the President. I share her concern about corruption and organised crime in Kosovo and I committed to doing all I can within my mandate and resources to assisting Kosovo in this challenge.  My mandate marks a new beginning, with the Mission no longer simply working for Kosovo, but with Kosovo, at every level of its rule of law institutions, and also in partnership with our counterparts in the EUSR."