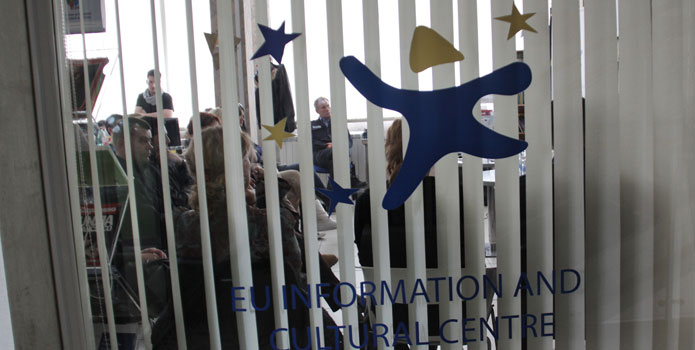 Focused on the true story of two siblings who answered an advert to work overseas, only to find themselves trafficked to a brothel near Serbian/Bosnian border, where they are brutally raped, beaten and forced into prostitution, the film Sisters sends a powerful message. Anyone gullible enough, faced with a desperate situation, could fall prey of this abusive and organised labyrinth. Rare are the ones who manage to escape it. Young people and their parents are largely uniformed, whilst authorities need to step up their activities in order to process this crime.

EU Info Centre, in cooperation with EULEX, hosted on February 19 in North Mitrovica, a screening of the film Sisters, as well as debate on human trafficking and organised crime. EULEX prosecutor Lili Oprea, Joachim Wenz, Chief of the Executive Division on Criminal Investigation in EULEX, and Sasa Antonov, professor of criminology at the University of North Mitrovica spoke at the debate about human trafficking, legal remedies, education and prevention. Around 40 students from various faculties of North Mitrovica University took part in the debate.

The trafficking in human beings, branded as "modern form of slavery", occurs all over the world, affecting around 20 million people, predominately women and children. According to Joachim Wenz this global crime generates billions of dollars in profit for traffickers. In Europe, he pointed out that most trafficked women are from Russian Federation, Bulgaria, Romania, Lithuania and Moldova.

Lili Oprea talked about a local trafficking case she was involved in as prosecutor, portraying the trafficking scenario of recruiting, transporting, isolating and exploiting the victim.

Professor Atanasov highlighted the need for education and prevention, warning the students not to be naÃ¯ve and take necessary precautions when answering job advertisements and offers of lucrative opportunities abroad.