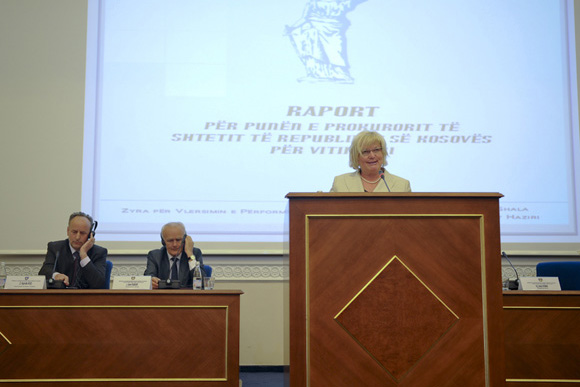 Chief EULEX Prosecutor Jaroslava Novotna stated during the presentation of the Annual Report of Kosovoâs Prosecution Offices that EULEX prosecution will change as to the objectives, concrete tasks and organisational framework after the European Union member states adopt the new mandate of the mission.

Novotna made these comments alongside the Kosovo State Prosecutor Ismet Kabashi who presented the work of the prosecution in Kosovo during 2011.

âIn the field of prosecution service, there will be a reconfiguration of the EULEX involvement in the districts. These changes are related not only to the mission as such, but also to the new Kosovo lawâ, said Novotna, adding that the Kosovo Special Prosecution Office (SPRK) will be affected by the upcoming new legislation.

Novotna stressed that there is visible progress in the Kosovo prosecutorial work, as noted in the Annual Report. She added that the mission is here to contribute to the further advancement.

âEULEX prosecutors will assist for two more years and will work with you in implementing the new defined goals of the mission through Mentoring, Monitoring and Advising as well as our executive mandateâ, said Novotna.

âOur assistance can bring added value to your work. And vice versa - you enrich us, the prosecutors from many different jurisdictions all over the worldâ, Novotna concluded.