Campaign highlights progress in the fight against drugs 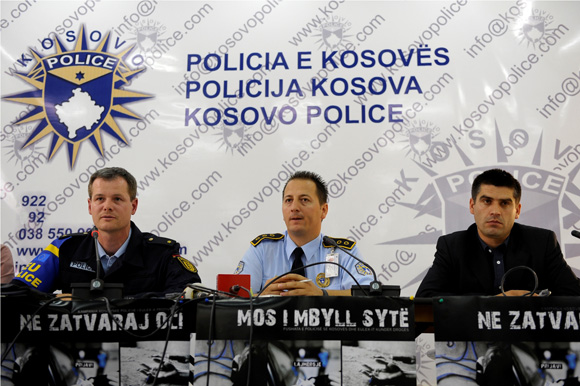 During a press conference to mark the end of a EULEX and KP joint drug prevention campaign, representatives from both organisation presented concrete figures resulting from the campaign against drugs.

During the campaign months May and June alone, Kosovo Police arrested over 110 individuals related to drugs and seized more than 15 kilos of heroin and close to 50 kilos of marijuana. In the same period, two convictions by mixed panels of local and EULEX judges found 5 people guilty of organised crime and drug trafficking, with sentences up to 15 years imprisonment. EULEX and local prosecutors have another 20 drug-related cases under investigation.

According to Bahri Shala, Chief, Kosovo Police Directorate of Investigations, these numbers send a strong message to drug criminals that their activities are closely scrutinized. Shala: âKosovo Police is more active in the fight against drugs. Over the last 6 months we increased our anti-narcotics operations by 32%, compared to the same period last year. The same amount of drug seizures took place.â

Oliver Hoffman, EULEX chief advisor to the KP Organised Crime Department, agrees with this assessment: âWe congratulate KP on their achievements. It is important for criminals to see the risks involved if you get involved with drugs in Kosovo. The two recent convictions on drug trafficking with combined sentences of 35 years imprisonment underline this message.â

The aim of the joint KP and EULEX campaign on drug prevention was to break the taboo on drugs in Kosovo society. Under the slogan âDonât close your eyesâ people were called upon to discuss the issue of drugs more openly with their children and in schools. And to report drug related incidents to the police. The campaign consisted of an intensive advertisement campaign on TV, on the radio, in newspapers and on billboards. A campaign bus with EULEX and KP police officers made more than 60 visits to towns, villages and schools in Kosovo. In total police officers had contact with over 23, 000 people to inform them of the dangers of drugs.

Both Bahri Shala and Oliver Hoffman stress that their fight against drugs is continuing and is not ending with this campaign. They call upon citizens to keep calling the police about suspicious activities. The KP call centre is open 24 hours a day, 7 days a week at the number 92 or 192 for mobiles. Phone calls are handled with strict confidentiality.