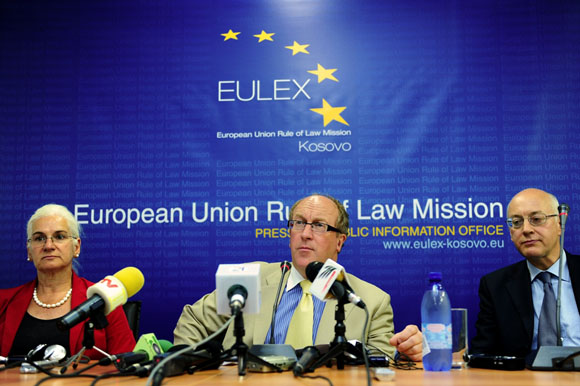 The Deputy Head of Mission Andy Sparkes, the outgoing President of the Assembly of EULEX Judges Maria Giuliana Civinini and her successor Francesco Florit presented the annual report on the judicial activities of EULEX judges 2010 at a press conference.

The speakers at the press conference highlighted that EULEX judges in 2010 have continued to empower Kosovo judges in decision-making as equal members in an integrated judicial system. The mandate of monitoring, mentoring and advising (MMA) has begun to take precedence over the executive functions, whenever possible. EULEX civil judges devote 90% of their time to MMA work.

Andy Sparkes said: âThis is the EUâs key long-term investment into a Kosovo system that brings justice to all citizens.â

While the judgments and judicial decisions taken by EULEX judges continue to have a direct impact on the lives of the individual parties, the work of EULEX also makes positive contributions to the advancement of the administration of justice in Kosovo. The reappointment process of judges and prosecutors in line with European standards and the establishment of a transparent case-allocation system were mentioned as examples during the press conference.

This week also marks the departure of Maria Giuliana Civinini as she ends her three year service as President of the Assembly of EULEX Judges and the introduction of her successor Francesco Florit.

At the press conference Deputy Head of Mission Andy Sparkes thanked Maria Giuliana Civinini for her work and welcomed Francesco Florit as the President of EULEX Judges.

Married and with two children, Francesco Florit was born on February 1963 in Italy. By career he is an Italian judge. He has served as International judge for the UN mission in East Timor from 2002 through 2005. He has been working as EULEX criminal judge at the District Court of PrishtinÃ«/Pristina and as member of the Human Rights Review Panel since 2008.