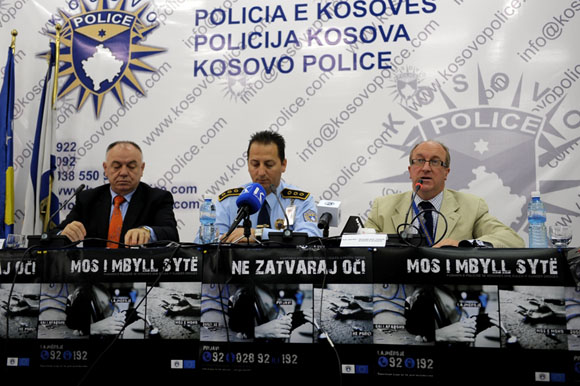 In his opening remarks, Andy Sparkes, EULEX Deputy Head, said: âThere is a strong Rule of Law element in fighting drugs, and that is why KP and EULEX are doing this campaign together. A large part of EULEXâs mandate is to support the local rule of law institutions. We have experts in all police stations, courts and border crossing points all over Kosovo, and drug related crimes are dealt with on all these levels.â

This campaign includes TV, radio and newspaper ads and also a bus tour throughout Kosovo where EULEX and Kosovo Police Officers will hand out informational brochures and will hold discussions with citizens on how to join the fight against drug use.

In his opening remarks, Reshat Maliqi, Kosovo Police Director-General, stated that statistics showed the number of drug users in Kosovo was increasing and that this problem should be treated very seriously. âWe cooperate with both schools and parents so as to increase awareness about the dangers of drugs in society,â he said.

The Kosovo Police phone number 92 is available Kosovo-wide to report crimes to the police. Both the Deputy Head of EULEX and the KP Director-General called upon all the people to report drugs-related crimes, as well as other crimes, to the police.

âThe rule of law is not just an abstract concept that is happening far away in the courts. It is also about getting criminals or drug dealers off the streets,â Andy Sparkes reminded everyone.