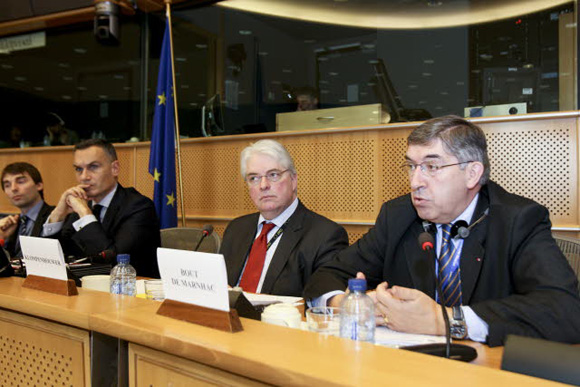 On 15 March, the EULEX Head of Mission, Xavier Bout de Marnhac, was invited to brief the European Parliament Subcommittee on Security and Defence, on EULEX activities and priorities.

His presentation and the interventions from Members of the European Parliament focused on the war crimes and organised crime allegations in Senator Dick Martyâs report. Mr. de Marnhac underlined that the mission was taking these allegations very seriously and that, almost immediately after the Council of Europe adopted a resolution based on the report, EULEX opened a preliminary investigation into the allegations.

The Head of Mission explained that the mission has the competence and jurisdiction to take this forward and that the mission was taking steps to ensure the highest level of security and confidentiality. With regards to witness protection, the Head of Mission clarified that EULEX had a high-quality witness protection programme in place, which had already proved itself.

He also outlined his two key priorities since arriving in his post in October last year; expanding the missionâs footprint and fighting criminal structures operating in the northern part of Kosovo and enhancing the missionâs commitment to prosecute and adjudicate key cases, particularly against organised crime and corruption.